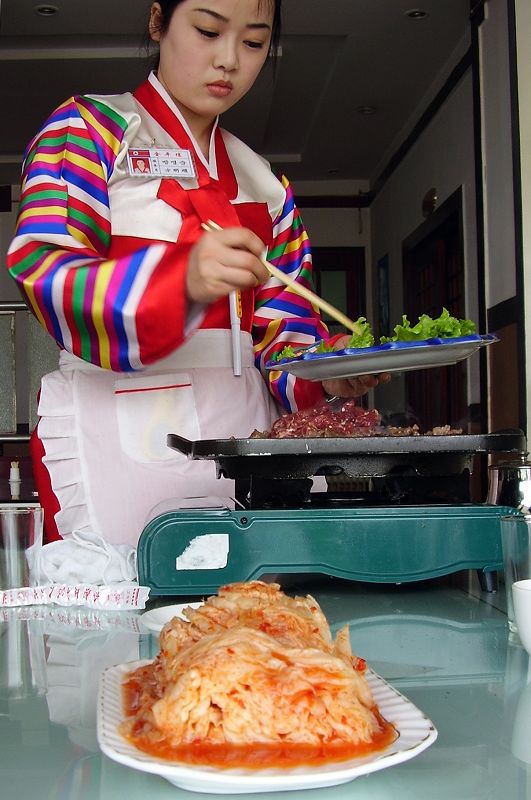 Maryjoy Mimis vividly recalls her first encounter with kimchi when she arrived in South Korea from the Philippines in 2003 to marry a local man.
"It looked so strange and smelled strong, and I thought I wouldn't be able to eat it. It was simply not right for me as a foreigner," said Mimis, 29.
Mimis echoed many other foreigners' first impressions about Korea's iconic but strongly-flavored dish, as the annual Gwangju Kimchi Cultural Festival opened last Saturday for a 10-day run.
"It is strange food and spicy. At first I did not like it but right now I really like it," said Sandy Combes, a 26-year-old teacher of English from the U.S.
"My mouth feels on fire," she said, giggling as she and hundreds of other volunteers helped make an awesome two tons of kimchi for a charity event.
There are scores of regional varieties of the dish but most often kimchi is made of cabbage, soaked in salt water to soften it.
It is then rinsed with fresh water and mixed with other ingredients including powdered chili, salt, garlic, ginger and spring onion.
Fermentation lasts a few days or a few years, depending on individual taste.
The festival in this southwestern city is being held under the slogan "Say Kimchi," a Korean version of western photographers' requests to "Say Cheese."
It features a kimchi-making contest for a prize donated by President Lee Myung-Bak, kimchi storytelling competition, exhibitions, kimchi-making lessons, a kimchi bazaar and dance and performances depicting kimchi fighting off flu. "Lots of bacteria in kimchi have pro-biotic effects and they can help your immune system get stronger," said Frederick Breidt, a U.S. microbiologist who was attending the festival's conference on fermented vegetables.
Korean researchers even claim the side dish helps ward off bird flu and Severe Acute Respiratory Syndrome, although no medical evidence has been presented.
Kim Young-Jin of the government-financed Korea Food Research Institute said tests last year showed almost all mice fed with kimchi survived bird flu after being infected with the virus, while 20 percent of the kimchi-less mice perished.
Such assertions are not surprising given kimchi's iconic status in South Korea - it has its own museum in Seoul and was blasted into space with the country's first astronaut in 2008.
The first ladies of Japan and South Korea even engaged in some kimchi diplomacy this month as their husbands held summit talks in Seoul. On the sidelines of the meeting between President Lee and Japan's Prime Minister Yukio Hatoyama, Lee's wife Kim Yun-Ok invited Miyuki Hatoyama to a traditional cuisine institute where the visitor made kimchi.
The government plans to build a US$40-million kimchi research institute by 2011 in Gwangju, which is famed for its gastronomic delights. Festival organizers said Gwangju and surrounding Jeolla province produce the country's best kimchi thanks to favourable weather, fertile soil, sun-dried sea salt, fermented anchovies and other seafood. "It's very good. I like spicy food," Breidt said after tasting freshly prepared Jeolla kimchi.