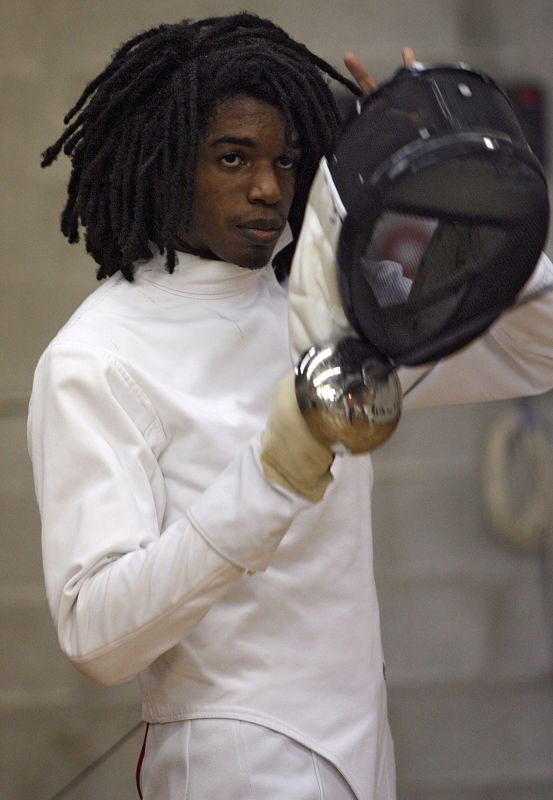 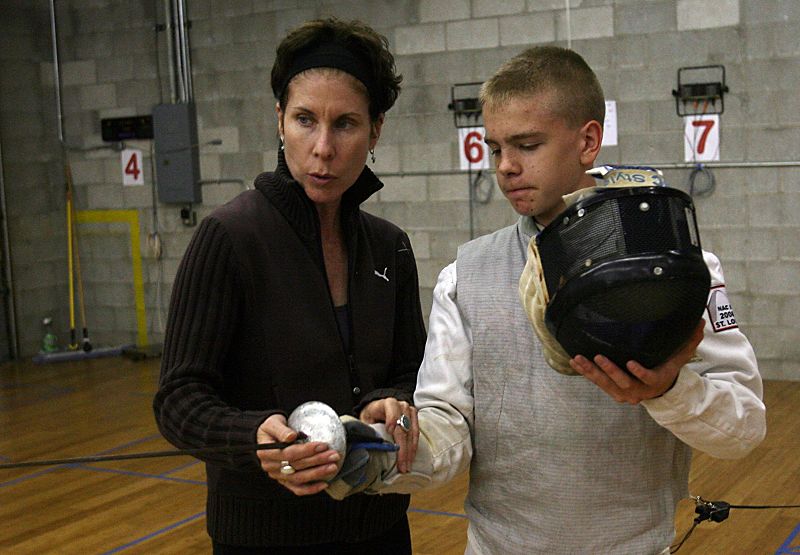 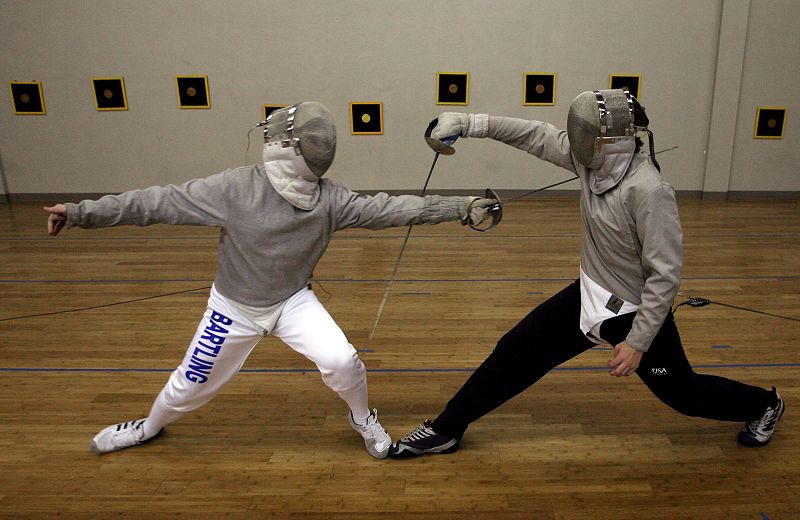 ST. LOUIS - Grace Savage and Christopher Slaughter sound like perfect names for fencing. They conjure up images romantic and violent, just like the sport.
But Savage and Slaughter make fencing look and sound smart and civilized, rather than sexy or savage.
The two were among a group of fencers, ranging in age from 7 to 58, sparring at Olympia Fencing Academy in University City, Mo., one evening last week.
"It's a very mental sport," said Savage, 14, of Wildwood, Mo., after finishing a bout. Perspiration dotted her forehead. She was slightly out of breath.
"It's hard physically too, but you really have to think about it," she said. "You have to get where you don't think about the physical part so you can focus on the strategy."
Slaughter, 36, of St. Louis, was a high school wrestler who took up fencing to meet a girl he liked. But he ended up falling in love with the sport. After high school, he said, he moved to Kansas City for a while to study under Vladimir Nazlymov, a Russian Olympic coach.
"It's hard to find a sport as mental as this," Slaughter said.
Coach Rebecca Schneider says to be competitive, fencers must spend hours doing footwork drills over and over until it's second nature. That way, their minds are free to think about a sport that's often called physical chess.
"Each style of fencing depends on different timing and distance in the way you advance, retreat and lunge," Schneider says. "Just when you're sick of doing drills and you're thinking, 'Oh, come on!' Oh, no. You do more."
Three disciplines
There are three fencing disciplines: saber, epee and foil.
Saber is the modern version of the slashing style of cavalry warfare. A point is scored by touching an opponent's torso, arms or head with either the edge of the flexible blade or the point. Body parts below the waist are off-limits, to simulate cavalry riders on horseback.
Epee descends from dueling, so the sword is heavier, thicker and stiffer. Points are scored by touching an opponent anywhere from head to toe with the point of the blade.
In foil, fencers touch the opponent with the sword tip on the torso and only the torso. Foil also has the most strategic rules.
Bouts take place on a strip that measures 15.3 yards long and about 2 yards wide, the dimensions of hallways in medieval castles. Fencing originated in Spain and became an honorable way for high society to settle disputes in Europe. About 8,000 nobles were killed in duels in Paris alone between 1588 and 1608.
Today, fencers wear protective suits made of ballistic material and helmets with masks that protect and obscure the face. Beginner uniforms start at $80, helmets at $45 and swords at $30. Lames, which are vests with metal woven into them to protect the upper body, run $65 and up.
'In the footwork'
To the untrained eye, the strategies and nuances of fencing are hard to see.
"It's all about getting your opponent to commit to making a move at a bad time when they're in a bad place," said Sean Horan, who coaches epee and saber at the academy. "It's fought more in the footwork, while you're planning traps and counter traps. Then the touch happens in a split second."
Equal emphasis is put on how fencers behave during bouts. Emotional outbursts are prohibited, and athletes are required to salute the judge and shake hands with opponents after bouts.
It's part of the reason Paula Reed, owner of Olympia Fencing Academy, encouraged her three children to take up the sport several years ago and then opened the academy in November.
"It's not like tennis where kids can throw a racket down and get mad," Reed says. "That's not allowed. It's very different than a lot of other sports where you have a lot of bad behavior. But in fencing, it's against the rules to show emotion. If you hit your blade on the floor, you lose points. Only after you're completely off the strip can you show any emotion, good or bad. But usually by that point, no matter what they're feeling, they're composed."
During competition, judges flash colored cards signaling penalties for bad behavior. Yellow is a warning; red gives your opponent a point; and black ejects you from the bout and any others during that tournament.
Mary Bartling, director of operations for Olympia, recalls an NCAA tournament where a judge flashed a black card, ejecting the fencer who committed the offense and his entire team from the rest of the tournament.
"My son, Adam, would get very frustrated when he wasn't doing things just perfect," Bartling said. "This has taught him to control that frustration."
Experience pays
Parkway Fencing Club and Academy Fencing Club practice at various locations in St. Louis. But the 6,500-square-foot Olympia facility is the only academy dedicated exclusively to the sport. It's in a converted warehouse behind Bob's Seafood Inc. at Interstate 170 and Olive Boulevard.
Reed says 75 percent of the Olympia team members are already nationally ranked in their age categories.
She credits the academy's experienced coaching staff. Horan, who coaches epee and saber, is the highest ranking fencing referee in Missouri. And Schneider, a foil specialist, ran the University of Illinois' Fencing Club for 10 years. She has trained nationally ranked fencers and has ranked in the top five of the Women's 40 Veteran category for the past seven years.
Reed is from Los Angeles, where fencing is a more popular sport. She and her family moved here 10 years ago.
"I saw that St. Louis is a sports town and that if people see what fencing is, they will become passionate about it too," she says. "Lacrosse began here 10 years ago and now it's big."
Reed will open a second Olympia location in Edwardsville, Mo., this year and a third in south St. Louis next year. Classes cost $100 for eight hour-long lessons. Memberships are $85 a month, which includes one free lesson and conditioning class plus open fencing during operating hours.