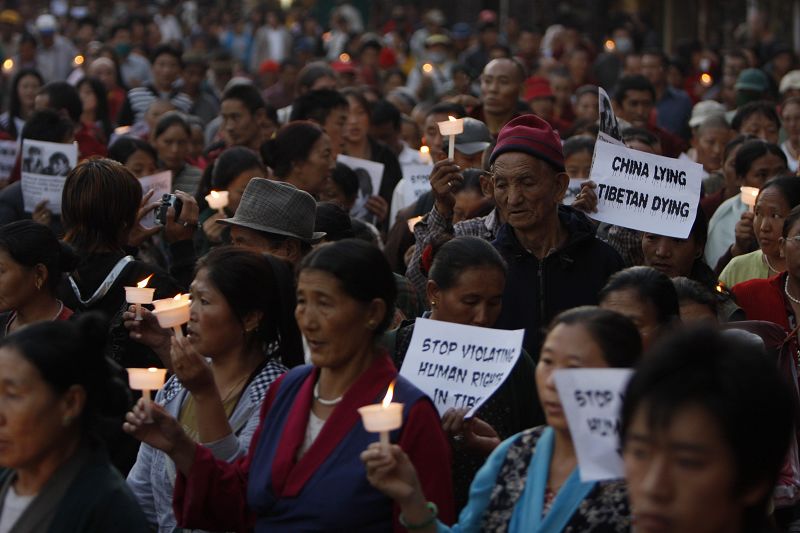 Two people have been put to death for their roles in deadly protests last year in the Chinese-controlled region of Tibet, the first known executions for the violence, an overseas monitoring group said yesterday.
Lobsang Gyaltsen and Loyak, who goes by one name, were sentenced to death in April on charges relating to "starting fatal fires," according to the International Campaign for Tibet, a Washington-based advocacy group.
The group said the Tibetans were executed in the regional capital of Lhasa but did not say when. Other Tibetan rights groups have said the executions were carried out last Tuesday.
Tibetans attacked Chinese migrants and shops in the regional capital of Lhasa in anti-government riots in March 2008 and torched parts of the city's commercial district.
Chinese officials say 22 people died, but Tibetans say many times that number were killed. The violence in Lhasa and protests in Tibetan communities across western China were the most sustained unrest in the region since the late 1980s. Tibetan resentments against Chinese rule have been fueled by religious restrictions and competition for resources with migrants from the Han Chinese majority. Similar grievances fed ethnic rioting in the adjacent heavily Muslim region of Xinjiang this year that left nearly 200 dead. In comparison with the slower pace of prosecutions in Tibet, Chinese authorities in Xinjiang have already sentenced 21 people, with nine sentenced to death. The official China Daily newspaper said yesterday three of those sentenced to death will not appeal the rulings.
In Tibet, according to New York-based Human Rights Watch, authorities have made thousands of arbitrary arrests, and more than 100 trials have gone through the judicial system over the unrest.
Lobsang Gyaltsen was sentenced to death for setting fire to two garment shops in downtown Lhasa on March 14 that killed a shop owner, according to a spokesman for the Lhasa Municipal Intermediate People's Court, cited by the official Xinhua News Agency in April.
Loyak received the death penalty for setting fire to a motorcycle dealership in Dechen township in Lhasa's Dagze county on March 15 last year, which led to the deaths of five people, Xinhua said. Many Tibetans only go by one name.
The court spokesman said the two defendants who were sentenced to death have committed very serious crimes, and only their executions can appease the anger of the public, according to the April 9 report by Xinhua. The article did not give the spokesman's name.
China says Tibet has historically been part of its territory since the mid-13th century, and the Communist Party has governed the Himalayan region since Communist troops arrived there in 1951. Many Tibetans say they were effectively independent for most of their history. More than 950 people were detained and 76 were sentenced following last year's riots, according to state media, but the government has never given a complete accounting and details of punishments continue to trickle out.