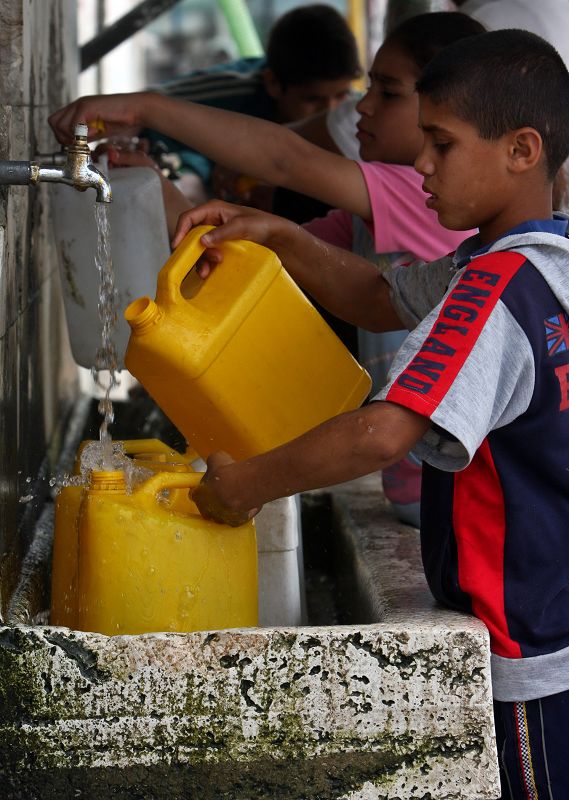 Amnesty International is accusing Israel of pumping disproportionate amounts of drinking water from an aquifer it controls in the West Bank, depriving local Palestinians of their fair share.
The London-based human rights group also said in a report released yesterday, that Israel has blocked infrastructure projects that would improve existing water supplies to Palestinians - both in the West Bank and those living in the Gaza Strip.
"This scarcity has affected every walk of life for Palestinians," Amnesty's researcher on Israel, Donatella Rovera, told The Associated Press in an interview Monday, ahead of the report's release. "A greater amount of water has to be granted to them." Israeli officials deny the accusations.
Water is a major point of contention between Israelis and Palestinians and is considered an issue that must be resolved before the two sides could make peace.
The issue is further compounded by the split in Palestinian territories, with the moderate Fatah movement governing the West Bank, while the militant Hamas rules the coastal Gaza Strip. Israelis use more than four times the amount of water per person on average than do Palestinians, whose consumption falls far below the minimum amount recommended by the World Health Organization, the report said.
The report especially focuses on the so-called Mountain Aquifer in the West Bank. It says that Israel uses more than 80 percent of water drawn from the aquifer and while the Jewish state has other water sources, the aquifer is the West Bank's sole supply of water.
As a result, the 450,000 Israelis who live in the West Bank and east Jerusalem use more water than the 2.3 million Palestinian residents, Amnesty said. Israel captured both areas from Jordan in the 1967 war. The Palestinians claim them as part of a future state. Israeli government spokesman Mark Regev called Amnesty's claims "completely ludicrous," and said Israel holds the legal right to the aquifer since it was the first to discover, develop and pump from it.
Regev said Israel pumps less water from the Mountain Aquifer today than it did in 1967, and Palestinian consumption of fresh water has actually tripled in that time.
He blamed the Palestinians for not investing in development in the West Bank and said they have failed even to drill wells that have already been approved.
Amnesty charged that Israel routinely denies Palestinians permits to launch desperately needed water sanitation and infrastructure projects in the West Bank.
Shaul Arlosoroff, a leading Israeli authority on water acquisition and use, said Israeli restrictions in the West Bank are meant to protect an already taxed aquifer from overpumping.
In the report, Amnesty also cited serious problems with water supply to the Gaza Strip. Since Hamas seized control of the coastal territory in 2007, Gaza's long-standing problems with sewage and water sanitation facilities have deteriorated, Rovera said. During Israel's offensive in Gaza last year, water and sewage pipes suffered severe damage.
Rovera said the water situation in Gaza had reached a "crisis point," with 90 percent to 95 percent of the water supply contaminated and unfit for human consumption.\ An Israeli blockade of Gaza has halted any repairs to the strip's overburdened sewage and water networks, preventing materials and equipment to repair the infrastructure from getting in, Rovera said.