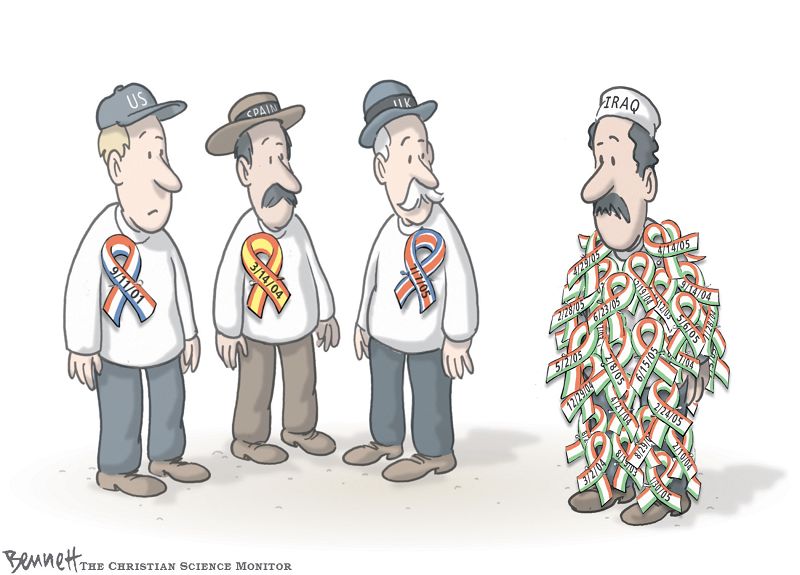 After more than nine long years, the pace of burials is finally beginning to slow at what is believed to be the largest cemetery in the world.
The sprawling, sand-colored cemetery has expanded steadily to accommodate the tens of thousands of victims of the Iraqi conflict. The seemingly endless maze of graves has also been the scene of several battles between Shia militiamen and American troops.
The cemetery's Arabic name is Wadi al-Salam, or Valley of Peace.
"The refrigerator truck from the health ministry would bring the corpses - sometimes 200 to 250 a day," said undertaker Haider Jabar Abu Saibeh. "The bodies were identified only by numbers." The cemetery at Najaf is thought to be at least 1,300 years old. It measures approximately 4.5 square miles, the rough graves at its edges merging into desert.
And for decades, it's also served as a hiding place for the living, with those seeking to elude justice or escape from a repressive regime hiding among the dense warren of tombs.
The cemetery owes its popularity to its proximity to the gold-domed shrine of Imam Ali - a companion of the Prophet Mohammed revered by Shia Muslims. His violent death at the hands of political rivals coincided with the emergence of the schism between Sunni and Shia Islam.
Shia Muslims from the world over seek to be interred in Najaf, as many believe that burial in the same soil as Imam Ali hastens the soul's entry into heaven.
Najaf's undertakers regard themselves as the custodians of a coveted profession. Though a recent drop in violence has brought a downturn in the burial business, the undertakers say they are grateful for the respite.
Their work is demanding enough, they insist, with duties that extend to the living as well as the dead.
"Our success depends on providing excellent services to the relatives of the deceased," said undertaker Mohammed Khadem Hasnawi.
A former gravedigger who rose through the ranks, Hasnawi cites honesty as an essential professional attribute. "Families from distant parts of Iraq cannot check on graves regularly," he said. "They have to trust their undertaker to maintain them." Undertakers' jobs at the Najaf cemetery are often passed from fathers to sons. Local clans such as the Abu Saibeh dominate the trade. Najah Abu Saibeh, an undertaker who likes to spice up his Arabic with the occasional English phrase, said the profession was "highly dignified because it honors the dead." It costs between US$180 and US$250 to be buried here. The fee includes the tombstone.
While the gravediggers themselves are usually day laborers, the undertakers themselves spend years in their trade and are often hired to look after the dead of an entire clan.
A successful undertaker cultivates strong social ties with client families in the most far-flung corners of Iraq. He must also master the legal and logistical aspects of the funeral, such as arranging accommodations for large groups who have traveled a long way to be at their relatives' graves.
Walking through the cemetery and reading the inscriptions about the graves opens a window on to the bloody violence Iraqis have endured over the past 30 years.
Here are buried victims of the Iran-Iraq war in the 1980s; the first Gulf War in 1991; the Shia uprising against Saddam Hussein that followed and those who died since the American invasion in 2003.
Those killed in war are described on their tombs as martyrs or victims of betrayal.
But Najah Abu Saibeh, who is conducting a survey of the cemetery, says such epitaphs are appearing less frequently these days now that the worst of the violence has abated.
Still, he estimates that about 60 percent of the millions buried here died due to some form of armed conflict.
Faris Haram is a reporter in Iraq who writes for The Institute for War & Peace Reporting, a nonprofit organization that trains journalists in areas of conflict. Readers may write to the author at the Institute for War & Peace Reporting, 48 Grays Inn Road, London WC1X 8LT, U.K.; website: www.iwpr.net. For information about IWPR's funding, please go to http://www.iwpr.net/index.pl?top_supporters.html.\par