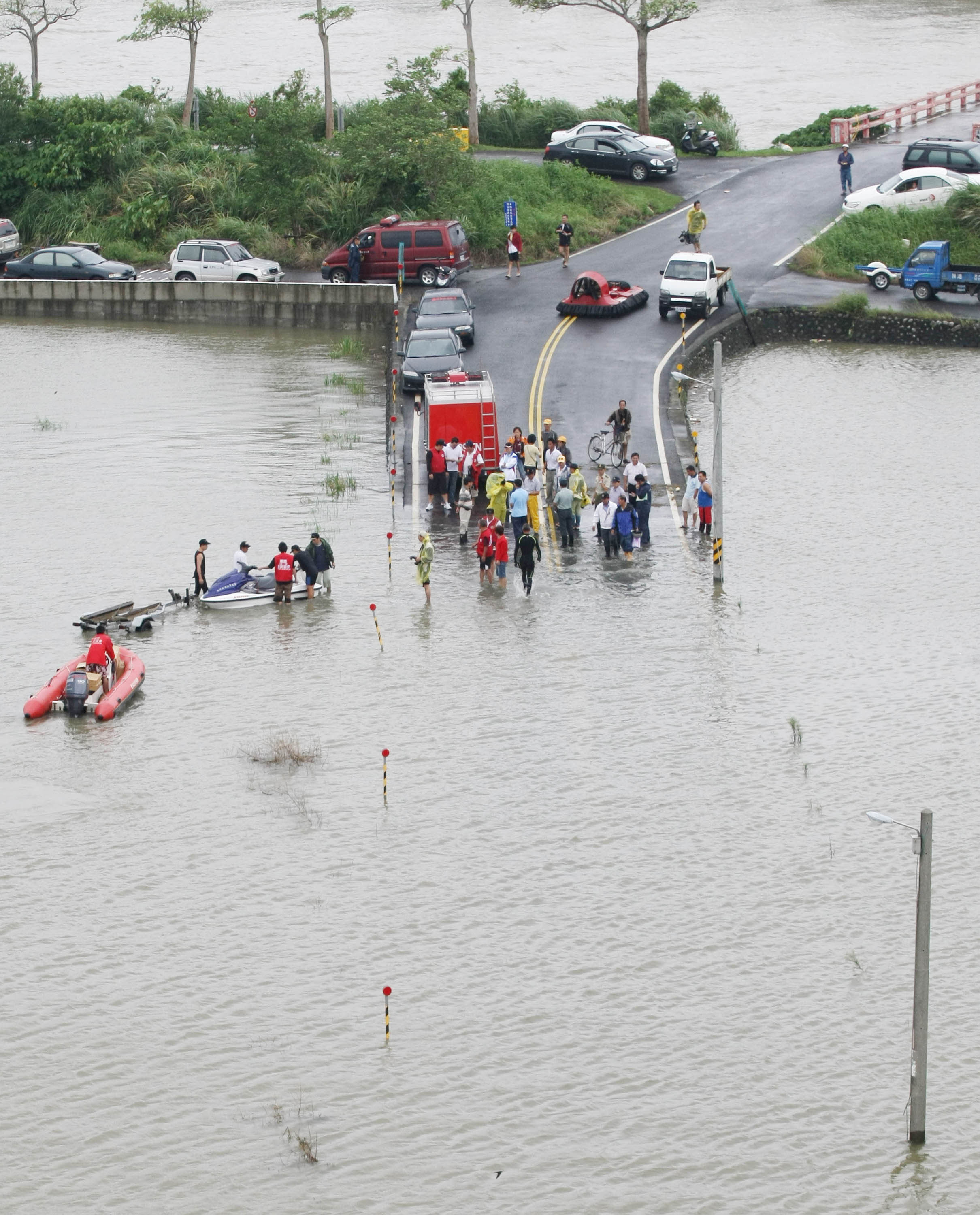 Repairs of transportation infrastructure were in full swing yesterday after Tropical Storm Parma left one dead and at least 30 floods, mostly in Ilan County.
A 43-year-old man surnamed Wei died Monday as he was swept away by swollen rivers in Beinan, Taitung County, the Central Emergency Operations Center said.
Most floods however, were concentrated in Northeast Taiwan's Ilan region, which recorded its biggest one-day rainfall since 1996, the Central Weather Bureau said. Forecasters repeatedly revised their total rain predictions for the area, from 800mm Sunday to 1,800mm yesterday.
The storm, which combined with northeasterly winds and with Typhoon Melor moving over the Pacific toward Japan, also disrupted transportation links around the region.
Landslides blocked six locations on the main expressway between Su-ao in Ilan County and Hualien, road officials said. Repair crews predicted traffic would be possible on one lane from 5 p.m. today, though the full reopening of the road would take at least two weeks.
The main railway line between Ilan and Hualien counties was also cut off by landslides Monday. A first attempt to restore services early yesterday morning was short-lived because of flooding inside a tunnel. A second try succeeded though traffic was still spotty because of high water close to the tracks, officials said.
The storm also forced the closure of many bridges either because they were flooded or because cracks appeared in the surface.
More than 7,000 people were evacuated nationwide, the Central Emergency Operations Center said.
Three employees of a water company drove their van off a hole in a bridge into a river in Datong, Ilan County, but managed to climb up the river bank and escape, reports said.
In Sansing, Ilan County, 80 percent of the local onion crop was destroyed, reports said, making a price increase for the vegetable likely. It is estimated that it would take local production one month to return to pre-typhoon levels, according to the Council of Agriculture (COA). The area is responsible for 15 percent of the national onion production. Sansing onions are usually supplied to expensive restaurants, the COA said.
Total damage to agriculture nationwide amounted to NT$29.53 million, according to preliminary data from the COA.
As the storm moved away, the COA cut the number of red flooding alerts from 109 locations in Ilan, Hualien and the Hengchun Peninsula at Taiwan's southern tip to a mere six late yesterday.
In Jiufen, the scenic town built on steep hillsides close to Keelung, more than 100 cracks appeared in floors and streets, according to cable station TVBS. The town has been one of Taiwan's major tourist attractions since director Hou Hsiao-hsien shot his movie "A City of Sadness" there in the late 1980s.
The Central Weather Bureau warned that torrential rains on the Hengchun Peninsula and in mountainous parts of the North and East might continue, even though Parma was moving away toward the Philippines.
Rain was expected to hit the North and Southeast for at least a couple of days longer, with disasters still possible, the Central Weather Bureau said.
The bureau lifted sea warnings yesterday at 5:30 p.m., after ending land warnings late Monday night. The eye of the storm was 370km south of Taiwan's southern tip at the time, and moving further away south into the Philippines' Luzon island, the weather service said.