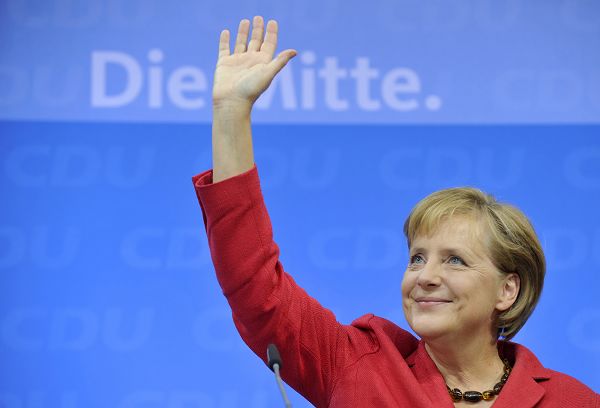 Not many politicians get a dress rehearsal for government. German Chancellor Angela Merkel is one of them.
In retrospect, the first four years of Merkel's time in office might well prove to be a trial run. Now with a successful campaign for re-election behind her, and at the head of a center-right government rather than the uneasy "grand coalition" with Social Democrats of her first term, she has a chance to show what she is genuinely made of.
In her next term, she has the opportunity to be what she promised four years ago: a reforming, pro-business leader in the style of Margaret Thatcher of the UK two decades ago.
Germany certainly needs it. So does Europe.
The pace of change in Germany has been glacial. It needs a dynamic liberalizing of its market to unleash the kind of entrepreneurial vigor that transformed its economy in the 1950s.
The euro-area economy needs one country to lead it. France under President Nicolas Sarkozy appears to have lost interest in economic progress. The UK looks set to spend a decade dealing with the mess created by the credit crunch. Spain is in an even worse mess. If any country is going to have the capacity to lead Europe out of this recession, it can only be Germany.
Will it happen? The opportunity is certainly there.
Easy victory
The German elections held over the weekend turned into an easy victory for the center-right. Instead of having to govern in coalition with the Social Democrats, the way is now clear for Merkel to form a coalition with the pro-market Free Democratic Party. The pressure on the new government will be coming from the right, not from the left.
Moreover, the left now looks to be permanently fractured. The Social Democrats scored a dismal 23 percent of the vote. That wasn't so much because Germans have drifted right, as because the left has split. The anti-capitalist Left Party won 11.9 percent while the Greens scored 10.7 percent. That matters. With the left broken into three parties, it is unlikely it can win power again for at least a generation. Merkel, together with the FDP, now have the chance to shift Germany dramatically in a pro-market direction.
That doesn't mean it will happen. The markets were disappointed by Merkel's first term. After campaigning on a radical platform, prompting hopes among investors, she turned into a traditional German consensus politician. That might have been because she was hemmed in by a coalition with the Social Democrats. It might be because those are her core beliefs. We are probably about to find out.
"A CDU/CSU-FDP coalition could bring about far-reaching reforms," Barclays Plc Chief Economist Thorsten Polleit said in a note to investors on the elections.
Indeed it could. The Free Democrats promised tax reform, with a top rate of 35 percent for income tax, and a bottom rate of 10 percent. A plan like that would almost make Germany a tax haven. It might even turn Frankfurt back into a major financial center once again: just think about the comparison with the top tax rate of 50 percent planned for London's financiers.
It is unlikely that Merkel will allow her partners in government to push through anything too radical. Even so, the stage does seem set for a tax-cutting administration, and one that is more willing to take on the entrenched power of the trade unions. After all, the Free Democrats actually increased their votes in the election. That gives them power and momentum, always the two crucial factors in politics.
What Germany needs
There is little debate about the kind of reform that Germany needs.
Its big-company, export-led, manufacturing-dominated economy must be reinvented for the 21st century. It needs small companies that concentrate as much on design and marketing as on precision engineering; more-flexible employment rules to create new jobs as fast as it gets rid of old ones; a financial sector that can deliver plenty of capital to entrepreneurs; a retail sector that gets Germans shopping again; and a tax system that rewards work and success, instead of punishing it.
The rest of the world tends to view Germany as an intensively conservative country, wedded to its social-market model. But, of course, in the 1950s it was one of the most creatively entrepreneurial countries in the world. With the right policies it can be again.
Germany has a chance to influence how the global economy develops in the next five years in two significant ways.
When political leaders talk about rebalancing the global economy, they tend to be referring to China. Yet Germany is the other big economy with a huge trade surplus. A tax-cutting, growing, consuming Germany would be a big step toward that rebalanced economy.
And it could take over the leadership of a European economy that looks bereft of inspiration. With the UK and Spain, the powerhouses of the continent's growth in the past decade, stuck in recessions that could last for years, growth has to come from somewhere. Germany is the only realistic option.
Now it is up to Merkel and her new allies to deliver.