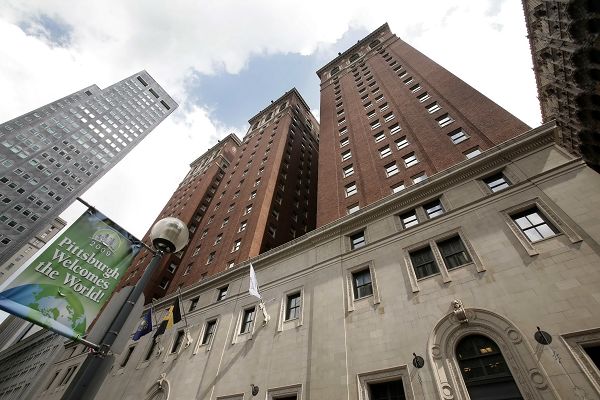 Tensions were running high in this former steel town yesterday as anti-G-20 protesters accused the police of using heavy-handed tactics to discourage them from rallying against this week's summit of world leaders.
A handful of activists were arrested overnight Monday, and volunteer medics, who are in Pittsburgh to provide care to any demonstrators who might be injured during anti-G-20 protests tomorrow and Friday, complained of "harassment at the space where they are staying in Polish Hill."
"We've had a couple of reports of people being arrested and given citations on the spot and then being released. And Seeds of Peace, which has a bus on which they cook food (for the demonstrators), had one person arrested," a man called Morgan, who works on a legal hotline set up by ResistG20.org, told AFP.
"It seems pretty clear that the harassment is designed to intimidate people out of exercising their First Amendment rights," said Morgan, who asked not to give his last name.
The first amendment of the United States constitution guarantees free speech and the right to peaceably assemble.
Lawyers from the American Civil Liberties Union on Monday filed a lawsuit on behalf of Seeds of Peace and the Three Rivers Climate Convergence (3RCC) group against the Pittsburgh police bureau.
The complaint, which was filed in a Pennsylvania district court, accuses the police department and several individual officers of harassing anti-G-20 activists in a bid to discourage them from taking part in protests tomorrow and Friday, when world leaders are due to hold talks in this once rough-and-tumble U.S. steel town.
"City of Pittsburgh police have engaged in a pattern of illegal searches, vehicle seizures, raids and detentions of 'Seeds of Peace' members," the suit said.
According to the lawsuit, in the early hours of Monday "more than 30 Pittsburgh police officers with semi-automatic weapons" raided a private property in the Lawrenceville neighborhood where Seeds of Peace had parked its food preparation bus.
After the activists refused to allow the police to search the bus or the property it was on because they did not have a warrant, four Seeds of Peace members were detained for nearly two hours on loitering charges, the suit said.
The four, who were detained while walking to their lodgings, were subsequently released without charge, the complaint said.
No one was available for comment at the Pittsburgh police bureau.
Protesters have said they plan to air their opposition to "the undemocratic way in which the G-20 operates and the decisions the group makes, which affect the more than six billion inhabitants of this planet."
Most of the groups taking part in the protests say they will be staging non-violent demonstrations of their opposition to the G-20.
But residents, officials and security forces fear that violent demonstrations such as those seen in 1999 in Seattle - where protesters and riot police faced off for days, disrupting a meeting of the World Trade Organization - or at the G-8 summit in Genoa, Italy in 2001, will mar this week's Pittsburgh summit.
Mayor Luke Ravenstahl has called in 4,000 highly-trained federal police officers to back up local security forces.
To prepare protesters for the summit, the Pittsburgh G-20 Resistance Group is holding a health and safety workshop today, at which activists will learn "how to survive 6,000 riot cops and come out swinging."
Activist groups around Pittsburgh have been organizing housing for the thousands of demonstrators from around the world who are expected to stream into the city for the summit.
On the eve of the summit today, workers and environmentalist movements will hold a concert, which 10,000 people are expected to attend, Patrick Young, a member of the anarchist Pittsburgh Organizing Group, told AFP.
The following day around 1,000 people are expected to march towards the summit venue in a protest organized by Pittsburgh G-20 Resistance Project (PGRP).