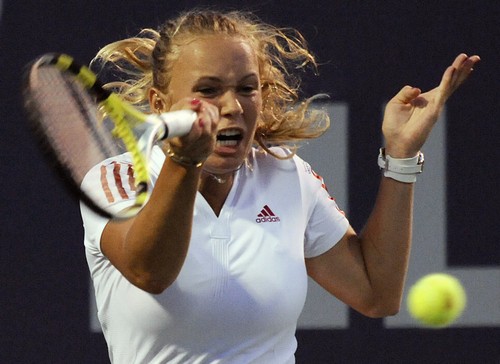 Defending champion Caroline Wozniacki took 43 minutes to win her first-round match at the Pilot Pen then credited boxing with helping her score the quick knockout on Tuesday.
The second-seeded Wozniacki dominated Edina Gallovits of Romania 6-0, 6-0, winning 20 of the final 21 points in a 19-minute first set before taking 24 minutes to finish off Gallovits.
The Danish star, ranked No. 9 in the world, said her speed and fitness level began improving just after Wimbledon, when friend and super middleweight champion Mikkel Kessler suggested she take up boxing.
"You run a lot," she said. "You get strength in your stomach, your back, your shoulders, your arms, all the things that you also need in tennis."
So far, Wozniacki has hit mostly bags, sparring just once with her coach - and apologizing after she punched him. "He started yelling at me, 'why are you saying sorry? It's what the game is about. You have to hit me,'" she said. "It's just fun to get some aggression out some times."
While Wozniacki barely worked up a sweat, Samantha Stosur needed almost 3 hours to beat Frenchwoman Alize Cornet in 900 (320C) heat. The Australian ended up losing the first set after nearly 90 minutes, but won 6-7 (8), 6-2, 6-4.
Amelie Mauresmo, a finalist four years ago, advanced with her first win over Alona Bondarenko of Ukraine in three attempts at 6-1, 6-1, sixth-seeded Marion Bartoli defeated Maria Jose Martinez Sanchez of Spain 4-6, 6-3, 6-1, and third-seeded Flavia Pennetta had a much easier time, defeating Ioana Raluca Olaru of Romania 6-1, 6-2.
In the men's draw, top-seeded Nikolay Davydenko won a 22-point tiebreaker in the first set and went on to beat American Robert Kendrick 7-6 (10), 6-3. Second-seeded Fernando Verdasco of Spain also advanced with a 6-0, 6-3 win over Paul Capdeville of Chile.