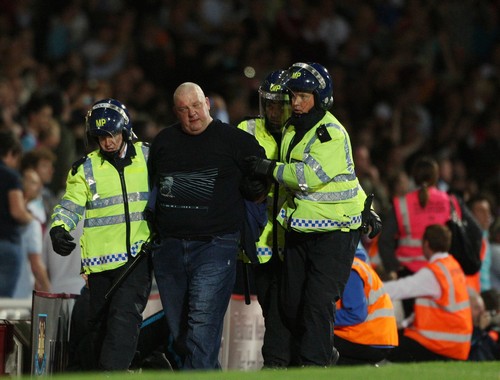 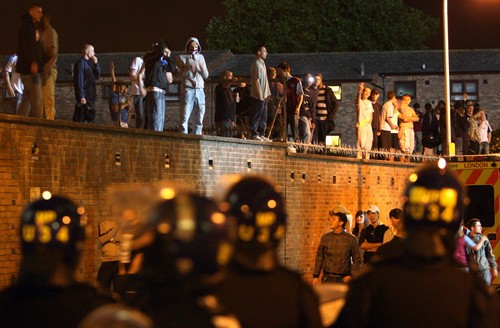 A fan was stabbed during large scale violence before West Ham met Millwall on Tuesday while the English League Cup match was interrupted by several pitch invasions.
Metropolitan Police said hundreds of fans were involved in the disorder before the game between the London neighbors at Upton Park. One man, said to be aged 44, was stabbed close to the stadium and taken to a hospital. Police said he was in a stable condition.
The violence was condemned by the Football Association.
"We absolutely condemn all of the disorder that has occurred at Upton Park this evening both inside and outside of the ground," the FA said in a statement. "We will be working with all parties, including the police and clubs, to establish the facts surrounding tonight's events.
"We strongly expect all culprits to be banned from football for life. They have no place in our game."
Several hundred fans confronted each other in streets close to the stadium, and police revealed CCTV footage of supporters hurling bottles and bricks at officers outside Upton Park.
Inside the ground, fans of both teams taunted each other, and stewards and police, some of then using batons, struggled to stop West Ham fans getting at the Millwall supporters. West Ham supporters ran onto the field several times, many of them after their team went ahead in extra time.
The teams walked off the field but returned after a few minutes. At the end of the game, which the Hammers won 3-1, more of their fans ran onto the field to celebrate their win, some of them goading the visiting Millwall fans.
West Ham manager Gianfranco Zola, a former Chelsea star who has spent several years in English football, said he never expected trouble.
"I've been involved in difficult games and things happened. Here, I've played seven years and I've never seen it like this," Zola said. "It's certainly not good for football. I was completely shocked. Totally.
"I knew it was a game that meant a lot for the two sets of supporters, but I didn't imagine it like this. What can I say? I'm a sport man. I love the game. I love to go on the pitch and try and make it exciting for the supporters and enjoyable for everybody to watch. This was beyond my powers."
Millwall manager Jenny Jackett said his team's fans did not run onto the field and he was saddened to hear about the stabbing outside the ground.
"I wasn't aware of the stabbing outside the ground. I'm very sad to hear that," he said. "We've got a passionate game in this country, but when it oversteps the mark then things have to be done."
As spectators left the stadium, police closed off several roads around Upton Park to guide fans towards the local underground station. Some 200 police in riot gear were near the station backed up by 20 more on horseback.
Police said several hundred fans clashed with officers outside the underground station, throwing a plastic drinks crate, bottles and cans.
Tuesday's violence was the worst in English football for several years. The domestic game in England has been relatively trouble free after a strong crackdown in the late 1980s that followed some of the worst tragedies to mar the game.
From the 1970s, English fans were responsible for violence all over Europe in club competitions and in major international championships. But a five-year ban from European competitions following the deaths of 39 people at the 1985 European Cup final in Brussels between Liverpool and Juventus led to strong measures domestically with tough policing and banning orders stopping known troublemakers from going to matches.
Tuesday's violence before the West Ham-Millwall game was not a surprise, however, and the scale of it suggested that it was set up in advance as soon as it was known that the neighbors had been drawn to face each other.