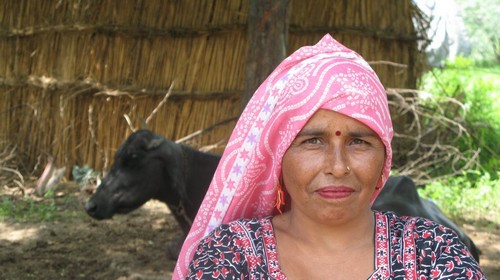 The only thing growing in Jayabati's parched field this summer is a mound of cow-dung bricks that, once dried and hardened, will be used as cooking fuel.
"No rain, no planting," says the weary-looking woman, who goes by one name, as she stands on the tiny plot of land she farms with her husband in the northern Indian state of Uttar Pradesh.
Like most of India's farmers, Jayabati has no access to irrigation systems. She depends entirely on the monsoon rains that fall between June and September to water her staple sorghum crop.
This summer, the rains have stayed away.
India is experiencing its worst monsoon in years. Though a bad monsoon is less damaging to an economy that is diversifies away from agriculture, it is making life tough for India's 234 million farmers.
Summer showers account for 80 percent of the country's annual rainfall but from June to mid-August - India's most crucial planting period - they were 29 percent lower than average, says India's meteorological department. In Uttar Pradesh, they were down more than 60 percent. The month of June was the most arid in India in more than 80 years.
Rice, the biggest crop sown during the monsoon, has been worst hit, along with sugar cane and oilseeds. Though rainfall has improved in some areas in recent weeks, it has come too late for many crops, which require an even sprinkling of rain throughout the sweltering summer. Some fear that heavy showers now could damage already reduced crops of sugar cane.
"It's too late to plant most crops now," says M.S. Swaminathan, an agriculture scientist who is described as the father of India's green revolution, a movement in the 1970s that brought high-yielding seeds and an increased use of fertilizers and pesticides to India. He describes this year's monsoon as "a calamity."
Fresh rainfall may prove more helpful to winter-sown crops such as wheat and rapeseed, which depend heavily on water from reservoirs. Indeed, the government is encouraging farmers to plant more winter crops to mitigate the effects of an awful monsoon.
The country's economy remains closely tied to its fickle summer rains, even though its technology boom makes more headlines.
Agriculture accounts for 18 percent of the country's total gross domestic product. But more significantly, it employs more than half the 1.1 billion-plus population. And many rural Indians seem certain to curb their spending on goods and services this year.
A bad monsoon can also reduce power production: Hydropower provides a quarter of India's electricity. In 2002, when monsoon rains were down 19 percent, GDP growth slowed from 5.8 percent to 3.8 percent.
Still, the Indian economy is becoming less dependent on agriculture. In 1990, the sector contributed 30 percent of GDP. This year, a more diversified economy will be especially helpful in offsetting the effects of a dismal summer: Industrial output in June surged to its highest rate in 16 months, rising nearly 8 percent over last year.
"Agriculture is a much smaller part of the economy now, and India appears to be in a recovery phase," says Surjit Bhalla, an economist.
Still, like many economists, he has shaved a percentage point off growth estimates for the year, to between 6 and 7 percent, due to the impact of poor weather. The government, meanwhile, has said it has enough food stockpiled from two years of bumper harvests to prevent high inflation.
For farmers, though, the effects of a poor monsoon are as disastrous as they ever were. Most are smallholders, who fall easily into debt, and a dry summer can mean ruination.
Last week, the government raised the minimum purchase price of rice and said it will increase food subsidies to rural areas and allow farmers to delay paying bank loans. It is also considering pumping more cash into a rural job initiative that guarantees 100 days of employment to every poor rural household.
Last year, the government spent nearly 700 billion rupees (US$14.4 billion) on waiving farms loans for impoverished farmers. It has said that this year includes no such plan.
But whatever measures the government takes, Indian farmers are suffering this summer.
Swaminathan says one of the first signs of "extreme distress" among farmers - an increase in cattle sales - is visible throughout the country.
In Uttar Pradesh, when asked about the weather, farmers talk first about their cattle.
Shivrani Sharma, who farms just over an acre of land with her extended family, says her herd of 10 buffaloes is becoming "diseased," a euphemism for starving.
"We have no food or water to give them," she says, adding that she will soon have to consider selling livestock "before they die."
The farming population has also seen an increase in suicides. Up to 15,000 farmers have committed suicide over the past decade after falling behind in payments to money lenders, according to the Tata Institute of Social Sciences.
Says Swaminathan: "I'm afraid we're seeing a sharp increase."