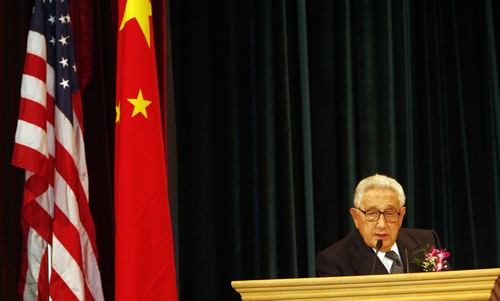 Anyone wondering about China's economic future could look to officials in Beijing. Or, they could just check with Henry Kissinger.
It sometimes takes a perspective removed from day-to-day market minutia to remind us where we are. Such may be the case with the secretary of state who helped re-establish ties between China and the U.S. under President Richard Nixon. His views are in big demand as China rises and U.S. influence wanes.
How, Kissinger is often asked, will the shift change the world? Will there be tension? Might the U.S. try to slow China's ascent to protect its turf?
The real question is why China is standing in its own way. The reference here is to China's currency policy, and it's an area in which Kissinger's insights may prove interesting.
Asked about China last week, one of modern history's best-known diplomats homed in on its currency growing pains. Economists and Chinese leaders, he said, are beginning to feel that "a new alternative or companion currency to the dollar would be created, built around the Chinese currency."
In the next breath, though, Kissinger explained why we shouldn't expect that anytime soon: The yuan isn't convertible.
That's hardly news to many investors. Yet four years after China technically scrapped its dollar peg, currency issues remain at the core of China's many challenges. They stand between China's designs on a major role in the global economy and its chances of playing it.
Trumping the dollar
It's not just the yuan's prospects of one day trumping the U.S. dollar. It's also about China's economy functioning normally and officials in Beijing finding a more productive use for US$2 trillion of state money. A lack of progress on the yuan is holding Asia's second-biggest economy back more than officials there may realize.
"Internationalization is a process, piece by piece," Yu Yongding, the Chinese economist whose calls for liberalizing the yuan heralded its 21 percent gain since 2005, said last week. "This will take a long time. But, step by step, we have to try our best."
Yu, a member of the central bank's monetary policy committee from 2004 to 2006, wants the government to encourage more overseas investment, reduce exports and promote sales of yuan-denominated debt by foreign companies while transitioning from managing the currency and piling up U.S. dollar assets.
Turbulent times
There are many reasons China won't make the yuan fully convertible. Reluctance to cede control in these turbulent times is one. Protecting all-important exporters is another. Perhaps officials realize the yuan could just as easily plunge as surge. With each passing year China manages the yuan, though, it misses an opportunity at economic progress.
China's massive arsenal of reserves is a weakness. It is the result of a counterproductive model wherein foreign consumers get to buy cheap Chinese goods at the expense of Chinese themselves. It's a strategy that has reached its limit and shackled China with US$776.4 billion in Treasuries.
Yu says those holdings "are not safe, and we should be worried about that." China's reserve obsession was wreaking enough havoc with the money supply before recent stimulus efforts. Evidence is increasing that the 4 trillion-yuan (US$586 billion) China spent to revive growth is ending up in stocks.
Guo Shuqing, chairman of China Construction Bank Corp. in Beijing, says excessive liquidity is causing bubbles. Clive McDonnell, head of equity strategy at BNP Paribas SA in Singapore, says that in the first half of the year China created credit equivalent to 45 percent of gross domestic product.
Bubble troubles
China's bubble troubles aren't as bad as they sound for the global economy. Its almost 8 percent growth doesn't remotely pack the punch of such output from the U.S., Europe or Japan.
The economy is the world's third-largest and its importance as a production base isn't in dispute. What should be very much in dispute is that the Chinese market, which is small, shallow and disconnected from what's occurring in the global financial system, matters in New York and London. Officials in Beijing crafted their stimulus to benefit the domestic economy. The real issue is that China's economy simply isn't international enough.
If, for instance, China could translate more of its trade surplus into investment vehicles other than Treasuries, there would be less pressure on the yuan. That would allow the central bank to stop intervening in currency markets and enable China to preside over a more balanced economy.
An oft-mentioned excuse for stockpiling U.S. dollars is a lack of alternatives. Hence the search for a new reserve currency, be it an existing one or a new unit of exchange managed by the International Monetary Fund.
Many Chinese officials see the yuan as a potential replacement for the U.S. dollar. It's a pipedream until China eases up on its currency controls.
How China can thrive in the years ahead and play a role in world trade beyond producing goods cheaply is beyond many economists. And, as it turns out, diplomatic celebrities such as Kissinger, too.