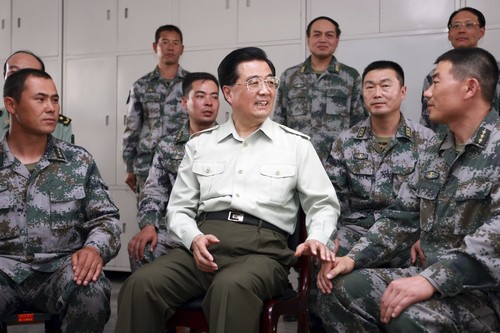 Buffeted by rising domestic unrest and missteps in handling ethnic violence, China's leaders are asserting greater control over the country's main internal security force with a new law on how and when the troops are mobilized.
The law, set to be passed this week, will define the mission of the 660,000-member People's Armed Police, which serves mainly as a better-armed backup to the regular police. Its troops, distinguished by their red epaulets, guard public buildings and infrastructure, and even jogged alongside the Beijing Olympic torch during its contentious journey around the world last year.
Most prominently, PAP troops were used to subdue rioters in Tibetan areas last year after violence there that left at least 18 people dead. They were used again last month when indigenous Turkic Muslims, called Uighurs, clashed with migrants from China's ethnic Han majority in the far western region of Xinjiang, leaving almost 200 dead - China's worst ethnic violence in decades.
President Hu Jintao visited with PAP, police and army troops in Xinjiang on Tuesday, telling them to make "upholding social stability the most urgent task."
Details of the law have not been released, but the official Xinhua News Agency said it would designate the PAP as responsible for dealing with "riots, unrest, large-scale violent crimes, and terrorist attacks," while limiting their powers of search and seizure.
A standing committee of the National People's Congress, China's legislature, said it is expected to pass the law today.
"The PAP are taking on heavier and heavier tasks from dealing with outbreaks of violence to anti-terrorism and disaster relief. They need a better legal safeguard," Sui Mingtai, a member of the NPC's Standing Committee, was quoted as saying in remarks posted on the congress' official website.
The PAP was established in 1983 as a police force for internal security. Their troops are based all over China.
Since then, the force has mostly relied on intimidation and arrests to enforce its will. It seemed initially unprepared for the level of violence in the Tibet and Xinjiang rioting.
PAP troops are also frequently called out to deal with rising cases of civil unrest in the vast countryside, usually linked to land disputes and protests over forced relocations - often involving farmers who have been displaced as a result of real estate projects. Such cases have spiked as China's economy has boomed.
Amid concerns that local authorities may misuse the armed police, the law will also include new procedures for deploying PAP troops, drawn up by the State Council, China's Cabinet, and the Central Military Commission that commands the armed forces.
Xinhua said the procedures would strip local governments at the county-level of the right to deploy troops independently - addressing a key complaint of critics who say local officials often regard such troops as their own private army. In his posted comments, NPC Standing Committee member Sui said the command structure needs to be adjusted to avoid abuses by "individual leaders or departments."
Such a move could boost the PAP's reputation among ordinary Chinese by increasing accountability. Although no longer notorious for corruption and lax discipline, armed police are still held in far lower esteem than the 2.3-million member People's Liberation Army.
The law "will have positive effects on the development of the PAP because it makes clear their responsibilities, social status and power," said Xu Zhongcheng, an expert on counterterrorism and organized crime at the Shandong Police College in eastern China.
The law also dovetails neatly with President Hu's overall program of strengthening Communist Party rule and the economy through legislation while seeking to mitigate social conflicts. Although all political threats to the party are crushed, Hu has ordered officials to avoid alienating ordinary Chinese by addressing the causes of dissatisfaction and toning down clashes and confrontations.
Nicholas Bequelin, Asia researcher for New York-based Human Rights Watch, said the law should help clarify the PAP's command structure and rules of engagement, while possibly reducing abuses such as summary detention. "There's definitely a need to bring the activities of the PAP within a more precise legal framework, given the growing role the PAP has been given in handling social unrest and riots," Bequelin said.