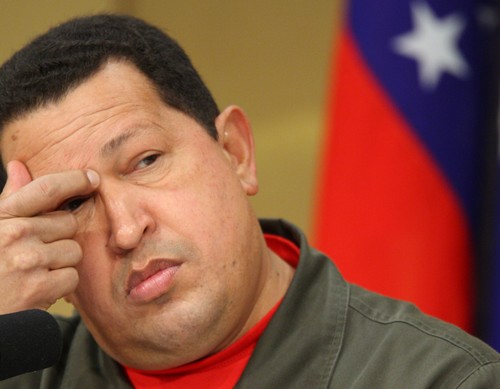 President Hugo Chavez said Tuesday that Venezuela is getting ready to break off diplomatic relations with Colombia over the neighboring country's plan to give American troops greater access to its military bases.
Chavez said that "there's no possibility" of repairing relations with the government of President Alvaro Uribe and that he instructed his foreign minister to "begin preparing for the rupture with Colombia."
"It's going to happen. Let's get ready," he said.
Venezuela and Colombia have been feuding for weeks over the negotiations between Bogota and Washington that would allow the U.S. military to increase its presence at seven Colombian bases through a 10-year lease agreement.
Colombian and U.S. officials say the agreement is necessary to more effectively help Colombia's security forces fight drug traffickers and leftist rebels. During a visit to Brazil on Tuesday, Colombia's deputy foreign minister, Clemencia Forero, said she perceives "increasing understanding and more clarity among the region's countries regarding the scope of an agreement that has the precise objective of fighting drug trafficking and terrorism."
Chavez scoffed at such claims, calling Colombia "a narco-state" and charging its political leadership "lives off" the cocaine trade. He referred to the pending base deal as "a declaration of war against the Bolivarian Revolution," referring to his socialist political movement.
Then he raised his voice and added: "You can establish 70,000 Yankee bases surrounding Venezuela, but you aren't going to beat the Bolivarian Revolution!"
The Venezuelan leader says the U.S. government could use Colombian military installations as launching pads for future operations to unseat Latin American leaders.
Warning that Colombia is trying to provoke Venezuela, Chavez, a former paratrooper commander, has ordered his military to be prepared for a possible confrontation and announced plans to buy dozens of Russian tanks to boost military capabilities. He also halted cut-rate fuel shipments to Colombia.
The leftist governments in Bolivia and Ecuador, closely allied with Chavez, have criticized the pending deal in similar rhetoric, but more moderate leaders in South America also have voiced concerns about the deal. Many people in the region are wary of a U.S. presence, remembering past decades when administrations in Washington gave support to right-wing military dictatorships. Presidents of South America's nations are meeting in Argentina tomorrow to discuss the issue. Uribe is expected to lay out his intentions, but some critics of the plan contend that U.S. president also should attend the meeting.