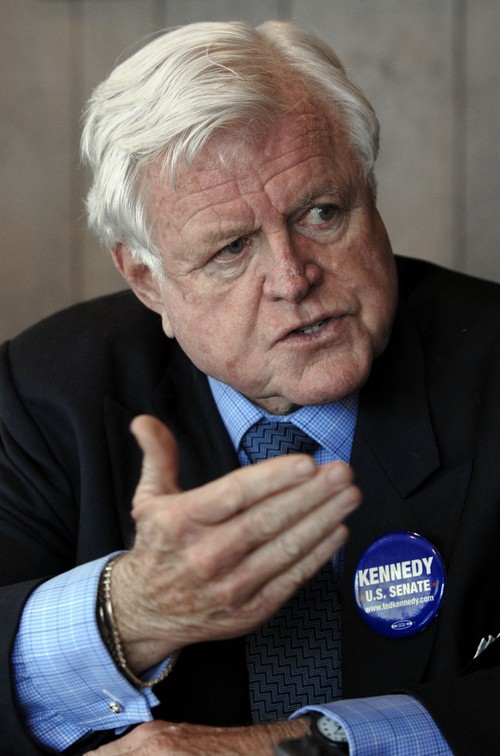 Ted Kennedy, the last of the storied band of brothers whose triumphs and tragedies dominated a generation of American politics, has died at the age of 77 after losing a battle with brain cancer, his family said yesterday.
Edward M. Kennedy, the "liberal lion" of the Senate who was once tipped to succeed his assassinated brother John as president, died late Tuesday at his home in Hyannis Port, Massachusetts after fighting cancer for more than a year.
"We've lost the irreplaceable center of our family and joyous light in our lives, but the inspiration of his faith, optimism and perseverance will live on in our hearts forever," the Kennedy family said in a statement.
Tributes to the veteran politician who led the left-wing of the Democratic party immediately poured in from across the political spectrum and the world, with President Barack Obama saying he was "heartbroken" at the passing of his mentor.
"Our country has lost a great leader, who picked up the torch of his fallen brothers and became the greatest United States Senator of our time," he said.
The youngest of the Kennedy sons, Ted was left to take up the helm of the political dynasty after the assassinations of president John F. Kennedy in 1963 and another brother, Robert, while on the presidential campaign trail in June 1968. Ted was the only Kennedy son not to die in a violent incident. Joe Kennedy, a pilot, died while on a World War Two bombing mission.
But he never fulfilled what many had seen as his political destiny, his White House hopes dashed after his name was tainted by scandal, drinking problems and a messy divorce. In 1969, Kennedy drove off a bridge at Chappaquiddick in Massachusetts, killing a female companion - Mary Jo Kopechne - and leaving the scene of the accident. The scandal poured cold water over his presidential hopes, which ended after he lost the Democratic nomination to incumbent Jimmy Carter in the 1980 election.
Nevertheless, Kennedy easily won repeated re-election to the Senate as a progressive Democrat throughout a 47-year tenure that made him one of the most important voices in American politics.
He was a champion of causes ranging from civil rights and education to workers' rights and immigration reform.
A consummate deal-maker in the upper chamber of the U.S. legislature, Kennedy forged sometimes unlikely alliances with more conservative politicians in pursuit of social reform.
On Sunday, John McCain - the 2008 Republican presidential nominee - said Kennedy's absence in recent months had made a "huge, huge difference" as the two parties struggled to reach a compromise on Obama's ambitious efforts at healthcare reform.
Kennedy authored scores of legislative initiatives during his career but died before seeing through his lifelong goal of transforming the U.S. healthcare system to provide guaranteed medical coverage to all Americans.
Meanwhile, the U.S. flag was lowered to half staff on the U.S. Capitol, as tributes poured in from around the world.
British Prime Minister Gordon Brown said Kennedy "will be mourned not just in America but in every continent."