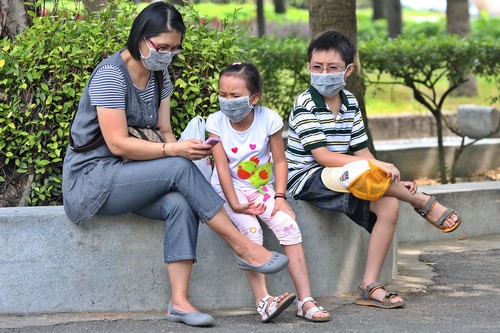 Taiwan could see 6,900 deaths and 7 million patients fall ill as a result of the A(H1N1) swine flu virus, a former Department of Health Minister said yesterday.
A third of the population could be infected and one out of every 1,000 patients could die, said Chen Chien-jen, a respected former health chief who played a prominent part in the fight against SARS in 2003.
"My estimates are conservative," he added during talks with reporters.
Taiwan has so far recorded five deaths and 38,000 infected patients with a rate of 14,000 new cases a week, according to the Centers for Disease Control. Yesterday saw three new serious cases of A(H1N1), all in Central Taiwan, bringing the total to 47, the CDC said. The new patients were a 23-year-old man, a 23-year-old woman and a 15-year-old man.
The World Health Organization has warned that Asia might be a weak spot in the campaign against the virus because the continent is short of vaccines. "Hospitals can become major sources of infection," Chen cautioned. The swine flu victims could infect other patients originally staying at hospitals for cancer treatment or suffering from a weakened immune system, Chen said.
He also warned that the victims of the swine flu were likely to be younger people, making the impact on society even more serious.
If the spread of the virus was well managed, it might last for two or three years, but if the authorities lost control, it could burn out after half a year, Chen predicted.
Former CDC chairman Su Yi-jen estimated the likely death toll in Taiwan at between 5,000 and 10,000. He warned that the reopening of schools and later local elections scheduled for December could lead to large outbreaks. If the virus had spread significantly by early October, the elections should be postponed or the campaign rallies replaced with televised speeches, Su said. Announcing its policy on anti-flu vaccines yesterday, the CDC said that when they would become available in November, the first priority would be the victims of Typhoon Morakot and medical staff, pregnant women, and children beginning from the youngest age and those with grave illnesses.
The military, which said this week four of its relief workers in the Southern Taiwan disaster area had contracted swine flu, announced yesterday that three Navy officers had also become A(H1N1) patients.
The three new military patients were all stationed in Suao, Ilan County. One was based on shore, and two on a ship, the Ministry of National Defense said. The ship's 214 crew members had been given leave and were asked to monitor their own health, the military said. The new cases brought the total of A(H1N1) infections in the armed forces to 44.
President Ma Ying-jeou was inviting specialists to discuss the fight against the swine flu today after rejecting opposition demands to mobilize the National Security Council. The Democratic Progressive Party described Ma's NSC decision, made during a telephone conversation with Premier Liu Chao-shiuan Tuesday evening, as "a grave error of judgment."
Ma was completely underestimating the threat posed by the virus, said DPP spokesman Cheng Wen-tsang. Only if the NSC met, could all government departments work together and take effective measures to prevent A(H1N1) from spreading even further after the summer, Cheng said.