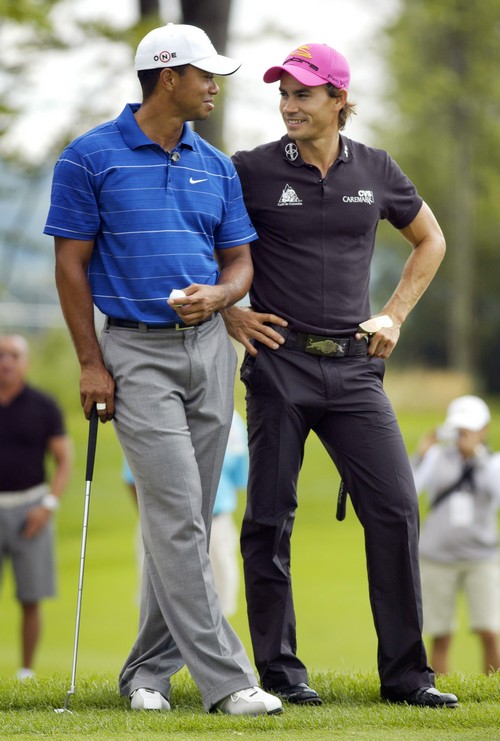 Tiger Woods edged defending champion Camilo Villegas to win the Notah Begay III Foundation Challenge skins tournament at Turning Stone Resort's Atunyote Golf Club on Monday.
After Villegas won US$180,000 with a birdie at the 14th hole, Woods won the next three holes to finish with US$230,000 to Villegas' US$200,000.
Begay won the final hole to pocket US$70,000, while Mike Weir was shut out for the second straight year.
The event, a collaboration between the Oneida Indian Nation of New York and San Manuel Band of Serrano Mission Indians of California, is an effort to aid the health of Native American youth and their communities. Begay, the only full-blooded Native American to play on the PGA Tour, established his foundation in 2005. It uses the sports of golf and soccer to promote physical fitness and wellness among Native American youth, who are plagued by obesity and diabetes.
Begay received a check for US$750,000 for his foundation and Woods, his roommate in college at Stanford and his longtime friend, departed with the winning trophy, a piece of Pueblo Indian black pottery from Begay's home state of New Mexico.
It was a rare appearance by the world's top player, whose schedule leaves little room for such forays. Woods was glowing afterward, the stunning loss to Y.E. Yang in the PGA Championship a week ago erased by a few swings for charity.
"Today was incredible, to come here and bring awareness to what Notah is trying to do," said Woods.