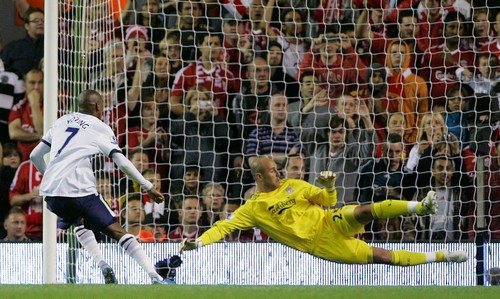 Liverpool slumped to its second defeat of the Premier League season Monday when Aston Villa won 3-1 at Anfield.
The first loss to Villa in eight years leaves last season's runners-up six points behind Tottenham and Chelsea after three matches - and with as many losses as in all of its last campaign.
"We have to improve," Liverpool manager Rafa Benitez said. "We will have to sit down and analyze every player now and make sure we do the right things in our next match (against Bolton). But our senior players must take more responsibility."
The damage was done before half time with Liverpool midfielder Lucas Leiva nodding into his own goal and goalkeeper Pepe Reina beaten by a header from Villa's Curtis Davies.
Fernando Torres pulled one back for Liverpool, but Villa's two-goal cushion was restored inside three minutes when Steven Gerrard conceded a penalty and Ashley Young successfully converted the spot kick.
Goalkeeper Brad Friedel pulled off a string of vital saves to secure Villa's first win over Liverpool since Sept. 2001.
"We've been getting a few bullets in the press for our performances recently," said Friedel, whose side lost its league opener to Wigan and its Europa League first-leg match to Rapid Vienna. "(This win) was the right time for us. We knew we would be under the cosh. Second half, we were under siege, but the penalty came at the perfect time."
A night that ended so grimly for the Reds begun so brightly against a side that had yielded more Premier League points to them than any other club.
Inside the first minute, Torres lofted the ball to the advancing Yossi Benayoun only for the Israeli midfielder's backward-header to drift wide.
The opener could have come from a goalmouth scramble in the 9th minute when Torres, Benayoun and Gerrard all had good chances to score, but were thwarted by some desperate Villa defense.
Liverpool, which beat Villa here 5-0 last season, then paid for their profligacy when, against the run of play, Villa took the lead in the 34th minute
Having conceded a free kick, Lucas headed Young's ball into his own net.
"In the first 20 minutes we created plenty of chances and played well," Benitez said. "Then we conceded the own goal and started to make more mistakes."
Liverpool's woes mounted on the stroke of half time when a corner was awarded much to the annoyance of goalkeeper Pepe Reina, who was booked for kicking the ball away.
Davies then rose between Carragher and Torres to meet Nicky Shorey's corner with a glancing header past Reina.
"I'm not renowned for scoring," Davies said. "I wasn't going to go up for it but luckily it fell onto my head."
Even though Liverpool improved after the break, the 38-year-old Friedel was in fine form in the Villa goal.
The United States and former Liverpool 'keeper blocked Gerrard's shot inside the first minute, palmed over Dirk Kuyt's header in the 58th and thwarted Gerrard again in the 69th.
"Friedel was outstanding - he rolled back the years," Villa manager Martin O'Neill said. "He was fantastic against his old club to perform like that at Anfield."
Lucas, at the heart of a midfield desperately short of creativity since Xabi Alonso's offseason transfer to Real Madrid, was brought off in favor of Andriy Voronin.
But it was Torres who gave Liverpool a lifeline in the 72nd when Emiliano Insua pinged the ball across the penalty area and the Spain striker hit home.
But just two minutes later Gerrard tripped Nigel Reo-Coker and Young dispatched the resulting penalty kick to restore Villa's two goal cushion.
O'Neill felt the victory was the perfect response to fans who booed the Villa team off the pitch when they lost the league opener to Wigan.
"We had a sluggish start on the opening day and to come and to win here against maybe one of the championship favorites was a terrific effort," said O'Neill. "We are off the mark after two games. It was staggering the number of prophecies made after one game in the league ... I didn't see Liverpool being booed off tonight."
Benitez's side might be if it doesn't bounce back Saturday at Bolton in the same manner that the players did by thrashing Stoke after losing on the opening weekend at Tottenham.
Also Monday, Sunderland advanced to the third round of the League Cup with a 4-1 victory at Norwich.