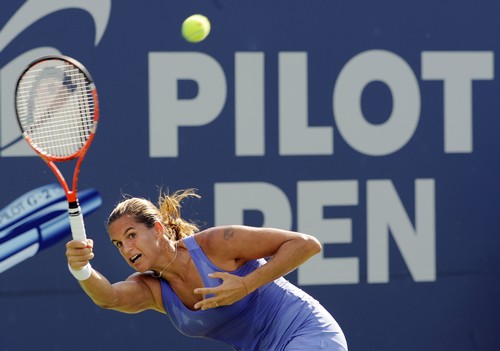 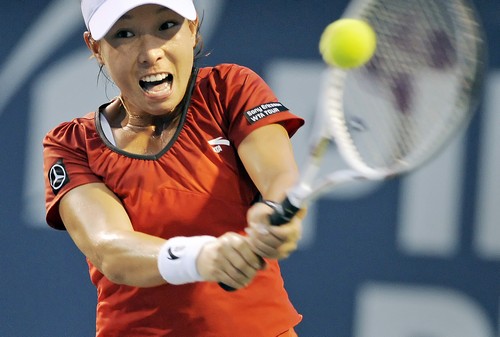 Top-seeded Svetlana Kuznetsova needed three sets Monday to overcome China's Zheng Jie 6-1, 6-7 (5), 6-4 in the first round of the Pilot Pen tennis tournament, the final warmup before the U.S. Open.
The French Open champion, who received a wild-card entry into this tournament last week, won the first set easily and appeared to be cruising in the second, up 4-2 before Zheng rallied. Using a strong backhand, Zheng won the next three games, and eventually took the set in a 7-5 tiebreaker.
"I was just very frustrated I did not close it," Kuznetsova said.
Zheng broke Kuznetsova in the third game of the final set and went up 3-1, before the Russian staged a comeback of her own. She won the next three games, and took the match on Zheng's serve when a backhand went long.
"I just want to play matches and to get into match shape," Kuznetsova said. "Physically, I feel good, and I want just to get some matches (before the Open)."
Amelie Mauresmo overcame some sloppy serving to beat Ai Sugiyama of Japan 6-4, 6-1 in her first-round match.
Mauresmo, the tournament's eighth seed, was playing just her second match since Wimbledon after losing in the first round at Toronto last week to Francesca Schiavone of Italy.
Mauresmo looked rusty in the opening set with six double faults, and was broken three times. But the Frenchwoman broke Sugiyama four times in that set, and twice more in the second set to improve her career record against Sugiyama to 11-0.
"The game is not really in place yet," Mauresmo said. "I needed this first set to really get into the rhythm and finally play a much better game and at a better level in the second set."
It took the fifth-seeded woman, Agnieszka Radwanska of Poland three sets to beat Italy's Roberta Vinci 6-2, 2-6, 7-6 (5).
Former Australian Open finalist Marcos Baghdatis of Cyprus lost his first-round match to qualifier Frederico Gil of Portugal in straight sets 6-4, 6-3.
Baghdatis, who has struggled recently dropping to 109 in the world rankings, was given a wild-card entry into the tournament. He said he will skip the U.S. Open and try to regroup.
Sixth-seed Sam Querrey led a trio of American men who advanced Monday. Querrey outlasted Marc Gicquel of France in three sets 6-4, 6-7 (3), 6-3 in the final match of the night, and the first of the second round. Earlier, Kevin Kim beat Teimuraz Gabashvili of Russia 6-4, 5-7, 6-3, and Robert Kendrick ousted Frederik Nielsen of Denmark 6-3, 7-5. Kendrick was facing top-seed Nikolay Davydenko in the second round yesterday.