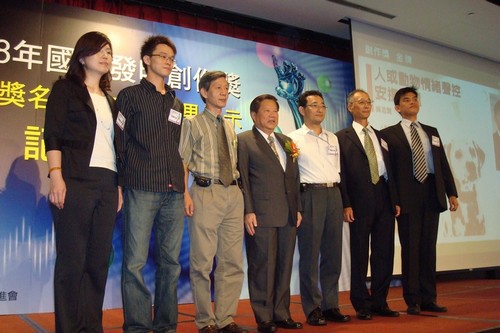 The winners of the 2009 National Invention and Creation Awards have been announced after a series of evaluations. This year, more products have been entered for this competition with 322 entries including 184 invention awards, 111 creation awards, and 26 contribution awards.
The Production Process for the AC light-emitting Device and the Rapid Assembly of a Shaft Structure stood out in the category for developed technologies. For the creation awards, the products that make use of mainframe computers and cell phones and those that provide the most up-to-date information and efficient communications were awarded for their marketability and practicability. Six enterprises got the contribution awards based on their number of copyrights, product patents, and research incentives for employees.
Taiwan companies invest much in research. "We have to encourage invention, innovation, and investments to upgrade our level of licensed technologies," said Zheng Zhi-huan (fourth from the left in the picture), the deputy director of the Intellectual Property Office of the Ministry of Economic Affairs.
"We also need to embark on more technology exchange through increased capital investment and expansion of existing commodity channels," he said.