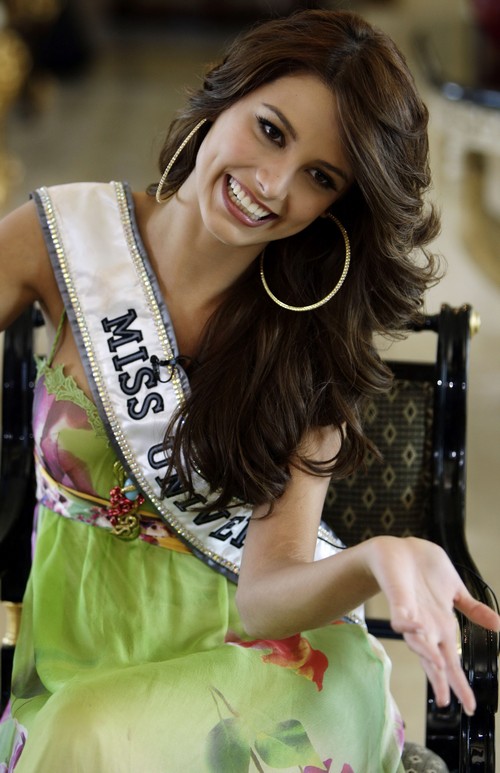 As Venezuela celebrated its back-to-back success at the Miss Universe competition, the rest of the world was left to ponder why the women of the South American nation are fairest of them all.
"It's our naturalness which characterizes us," explained Stefania Fernandez after receiving the crown from last year's winner, another Venezuelan beauty by the name of Dayana Mendoza.
The Mendoza-Fernandez sequence represented the first time in the competition's 59-year history that the same nation has claimed the crown twice in a row. Venezuela's sixth crown puts it only one win away from drawing level with the United States overall - even though with only 26 million people it has less than one tenth of America's 300 million population. Famous for its oil-wealth, firebrand leftist President Hugo Chavez, and of course stunning women, Venezuela's latest victory came in the form of Fernandez, a gorgeous 18-year-old brunette.
The tanned beauty wore a red dress as she received the ultimate prize in beauty pageants at a glittering ceremony in The Bahamas.
A smiling Fernandez has graced the pages of media across Venezuela, bringing a welcome change from politics in the polarized nation, where Chavez tends to steal the headlines for berating the United States.
"Finally we're waking up with some good news," said Telmo Gomez, a retired professor in Caracas.
"Venezuela is only in the foreign press when it's about Chavez," said Julian Marquez, drinking in the same cafe. "But today they're talking about us because our women are the most beautiful in the world."
The beauty cult is part of life in the nation which is a melting pot for mixed races including roots from Spanish, Italian, Portuguese, Arab, African and indigenous peoples.
Venezuela's first Miss Universe, Maritza Sayalero, helped boost the beauty business with the country's first victory in 1979.
The new champion, Fernandez, was crowned before an estimated worldwide audience of some one billion people.
"We Venezuelans don't get tired of it," said Mendoza, who has been touring the world since her 2008 triumph. Two other women from Latin America made it into the last group of competitors at this year's event in The Bahamas: 23-year-old Ada de la Cruz of the Dominican Republic and Mayra Matos, 20, of Puerto Rico. Australia and Kosovo rounded out the top five. Each woman was judged in three categories: swimsuit, evening gown and interview as they vied for the coveted title.
As the new Miss Universe, Fernandez will receive an undisclosed monetary prize, a US$100,000 scholarship to study acting at an academy in New York, a five-day vacation package in the Bahamas for two, a set of jewelry and a complete wardrobe.