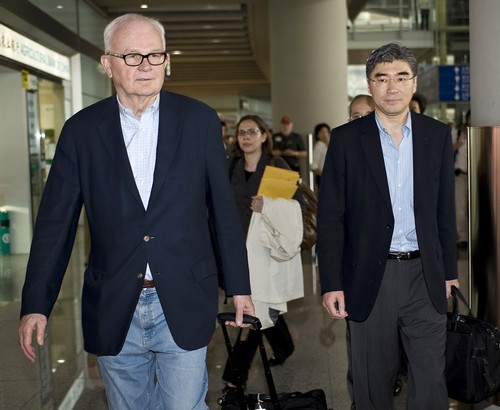 North Korea has invited a U.S. special envoy to visit Pyongyang for talks on ending the standoff about its nuclear weapons program, South Korean media reports said yesterday. Seoul's foreign ministry declined to comment on the reports but such an invitation would be the latest peace overture by the hardline communist state after months of hostility.
JoongAng Ilbo newspaper said Stephen Bosworth, special representative for North Korean policy, had accepted the invitation and would make the trip next month. Yonhap news agency, which, like the newspaper, quoted diplomatic sources in Washington, said it was unclear if the U.S. would accept the offer.
JoongAng said Bosworth would be accompanied by Sung Kim, the U.S. point man for six-nation nuclear talks which also group South Korea, China, Japan and Russia.
Bosworth's team would probably visit South Korea, China and Japan in early September and then head to Pyongyang where they were likely to meet leader Kim Jong-Il, the paper quoted a source as saying.
The itinerary would preserve Washington's principle that it is willing to hold bilateral talks with Pyongyang but only within the six-nation framework.
JoongAng quoted another source as saying the Obama administration believes the North's recent peacemaking gestures are prompted by an international drive to enforce United Nations sanctions on its nuclear and missile programs.
"Even if negotiations move forward, the U.N. sanctions will not be lifted easily," the source said.
The U.S., it said, would instead give Pyongyang's regime a de facto security assurance by promising it would not intervene in Kim's gradual transfer of power to one of his sons.
The North in March rejected a visit by Bosworth when he travelled to other Asian capitals to try to restart the stalled six-party talks.
Pyongyang in April announced it was quitting the forum in protest at the U.N. Security Council's censure of its long-range rocket launch earlier that month.
In May the North staged its second nuclear test, incurring tougher sanctions that were even supported by its close ally China.
Its first conciliatory gesture came in early August when it pardoned two American journalists after former U.S. president Bill Clinton visited Pyongyang.
Yonhap said the North conveyed its invitation to Bosworth around that time.
The North also freed a South Korean detainee and said it was willing to restart lucrative tourist trips and family reunions for South Koreans.
Seoul officials said the two sides would hold talks starting today on resuming the reunion program, probably during the Korean thanksgiving holiday in early October.
The North also lifted tough restrictions on border crossings, and last weekend sent senior envoys to Seoul for the first talks with conservative President Lee Myung-Bak since he took office.