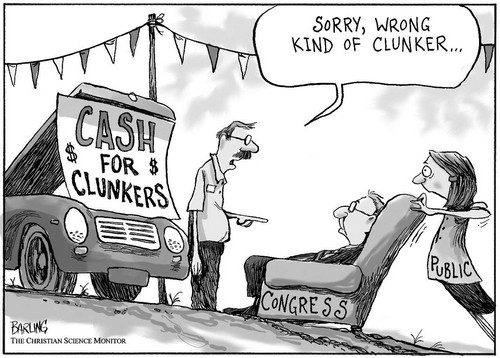 A new game has emerged in UK intellectual life in the past few weeks: trying to explain the financial crisis to Queen Elizabeth II.
In November last year, the British monarch visited the London School of Economics. There she asked a simple question: How come all the economists didn't notice that the credit crunch was about to happen?
Last month, the British Academy, the UK's national academy for the humanities and social sciences, assembled a group of experts to offer her an explanation. This month, another panel of public thinkers was put together to send an alternative view to Buckingham Palace.
At this rate, every economist in the country will have a theory for Her Majesty. That isn't a futile exercise. Economics has failed to explain why the financial crisis of the last two years wasn't predictable. And until it can do so, the profession needs to work harder. If economics can't explain it, then the dismal science must itself be in dismal shape.
When the queen visited the LSE last year, the professors were rightly embarrassed to be put on the spot. The LSE is one of the most prestigious schools anywhere in the world. And yet, none of its experts had seen the storm clouds looming on the horizon. Nor could they offer a convincing reason for that failure or refer the queen to Oxford and Cambridge academics for answers. Harvard and Yale couldn't do any better.
In response, the British Academy sent an open letter to the queen written by Tim Besley, an LSE professor and a member of the Bank of England's Monetary Policy Committee, and Peter Hennessy, a historian at the University of London. Their letter didn't break any new ground, though it was a fair summary of how the global economy got into such a mess.
It "was principally a failure of the collective imagination of many bright people, both in this country and internationally, to understand the risks to the system as a whole," they wrote. Not everyone was happy with that.
The consulting firm Abundancy Partners had its own group of academics, environmentalists and public thinkers who sent a letter to the queen. It pushed a green analysis of the crisis, nailing a culture of excessive consumption as the real culprit.
Presumably this is a game anyone can join in. No doubt every economics department in most of the world's major universities will be preparing their own theories, and popping them in an envelope to Buckingham Palace.
Perhaps Her Majesty could canvass the views of the rest of the royal family. "It's all the fault of Johnny Foreigner," Prince Philip might observe. "It's all the fault of Diana," Prince Charles might suggest. And if anyone asked Prince Harry, the answer might be even crisper: "Who cares about the credit crunch. Let's just have another drink."
Joking aside, the debate is telling us something. The queen, with the confidence that comes from having been on the throne for more than half a century, has identified a problem. For all words devoted to the subject, no one can say why the credit crunch wasn't avoided.
The question she asked is, after all, the one that everyone has asked. It's just that more effort is made to answer the queen.
We know that banking bonuses encouraged a system of excessive risk-taking. But we don't really know why the financial firms pay their staff so lavishly, and feel compelled to take such massive risks with their capital.
We know the huge trade imbalances between China and the U.S. and Europe have created vast pools of capital that have to be recycled somehow. But we don't really know whether those imbalances are inevitable, or whether they can be unwound. We know the environment is threatened by climate change. But we don't really know whether we can stop that without a drop in our living standards that we'll find hard to accept.
We don't really know whether huge government-stimulus programs, and the furious efforts of central banks to print more money, will lift the world out of recession. Or whether it will just create hyperinflation and a bigger crash in a few years. And that surely points to a broader failure of the science of economics. It isn't able to come up with convincing theories that explain the world we live in. Nor is economics really capable of reassuring us that our experts have the foggiest idea how we got into this mess or how to get out of it.
The world's leading economists should keep sending more letters. Until Her Majesty is finally able to reply: "Thank you, gentlemen. Now I get it."