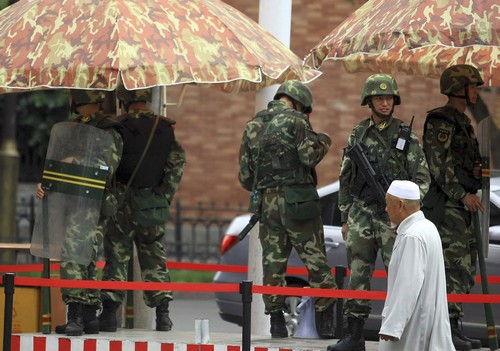 Rebiya Kadeer, the leader of China's Uighur minority in exile, has highlighted a report that nearly 200 inmates were "tortured" to death in prison. The allegations came as a war of words intensifies between Beijing and the 62-year-old former businesswoman. China has accused her of instigating recent unrest in northwestern Xinjiang region, charges she adamantly denies.
Kadeer, who lives in the Washington area, said Monday she received a fax from a Uighur policeman who fled to nearby Kyrgyzstan and gave a grim account of Urumbay prison south of the city of Urumqi.
The policeman said that 196 Uighurs detained in a clampdown in the region "were tortured and killed" at the detention center, according to Kadeer.
"One of the Uighurs, named Erkin, couldn't stand the torture and killed himself," she said during a recording of a segment on the current affairs cable network C-Span about her memoir, "Dragon Fighter," which was published in May.
The World Uighur Congress leader said it was impossible to verify the account as phone lines had been cut.
"I'm sure that as soon as this is made public, China will say that it's not true," she said. "We cannot prove it because everything is down."
China's worst ethnic violence in decades broke out on July 5 in Urumqi, pitting Han Chinese against Uighurs, a Turkic-speaking and predominantly Muslim people. At least 197 people died, according to official figures.
Local officials yesterday denied a front page report in the state-run China Daily that the People's Intermediate Court in Urumqi was preparing to place more than 200 people on trial amid tight security.
"At present, there is no scheduled date for the trial," Xinjiang government spokesman Li Hua said about the report published Monday.
"I don't know how China Daily got that information, but it's not true. We will announce it to the media when there is a trial."
Kadeer, who spent some six years in a Chinese prison before her release under U.S. pressure in 2005, denounced the China Daily report as "another sham to deceive the world about what's actually going on behind closed doors."
The Chinese government, she said, "already decides the lawyers who are going to 'defend' the Uighurs."
Lawyers who do not act in accordance with the Chinese government's expectations, "will suffer the same fate as those being tried," she added.
Kadeer voiced appreciation for the receptions she received on recent visits to Japan and Australia, which came despite Chinese pressure to block her entry. She said she was startled at the number of reporters who showed up to her news conference in Australia.
"I have never been hopeless in my life," said the mother of 11. "I believe that democratic societies will not just watch this happen, because our movement is peaceful."
China on Saturday freed high-profile activists in a sudden move that came shortly after the new U.S. ambassador, Jon Huntsman, arrived in Beijing and said that President Barack Obama would visit in November.
Among those freed was Ilham Tohti, a Beijing-based academic who was apparently detained over his website Uighur Online, which included writings on the unrest in Xinjiang.
In an interview with Radio Free Asia, Tohti said that police knocked on his door late Monday to warn him against speaking out about how the violence was handled.
"They told me I could soon be sentenced - be sentenced to death, be 'dealt with,'" Tohti said.
The Uighur activist said he was detained partly at his home but for two weeks was held at a hotel.