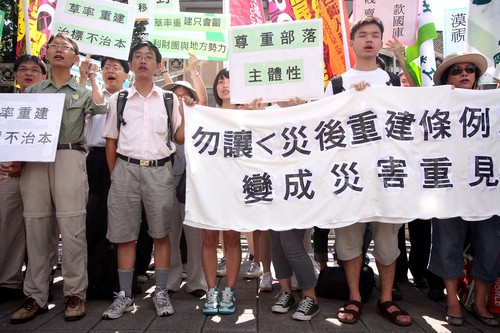 The Legislative Yuan began a three-day special session to discuss post-typhoon reconstruction yesterday amid disputes about how much money should be budgeted.
While the government plan, supported by the ruling Kuomintang, proposed a maximum of NT$100 billion, the opposition Democratic Progressive Party said at least double was needed.
DPP whip Wang Sing-nan said the government budgeted NT$210 billion after the September 21, 1999 earthquake, so the present effort needed a minimum of NT$200 billion without a maximum limit.
In speeches during the afternoon, some KMT lawmakers also advocated a more generous approach, saying NT$200 billion could be disbursed in stages as needs arose.
Legislative Speaker Wang Jin-pyng said any government budget needed a maximum limit, but the exact amount could still be negotiated during talks over the three-day session.
The DPP also wanted Premier Liu Chao-shiuan to appear at the Legislative Yuan to explain his legislative proposals, but the KMT refused, saying he would present a report once a clear budget plan was being submitted.
The budget itself is not expected to be presented to the Legislature until its next session, in September, reports said. While lawmakers discussed typhoon relief inside the Legislative Yuan, social groups protested outside, saying three days was too short to find a solution for the problems caused by Typhoon Morakot. They said the lawmakers were only interested in healing the symptoms, not the root causes of the destruction.
Responding to the protesters, DPP lawmaker Huang Sue-ying said she would ask the government to organize hearings in the disaster areas to explain its reconstruction plans to the residents.
Typhoon victims yesterday also visited Wang Chien-shien, the president of the Control Yuan, the nation's top government watchdog body.
He said President Ma Ying-jeou and Premier Liu Chao-shiuan should stop traveling around disaster areas and visiting victims, but stay in Taipei instead to concentrate on managing the reconstruction.
Ma visited Neimen in Kaohsiung County yesterday amid calls by protesters to include aboriginals in the committee managing the reconstruction. Liu would take ten ministers and vice ministers with him to a new reconstruction office in Southern Taiwan for its opening Wednesday, and spend as much time as possible there for one week, Cabinet spokesman Su Jun-pin announced yesterday.