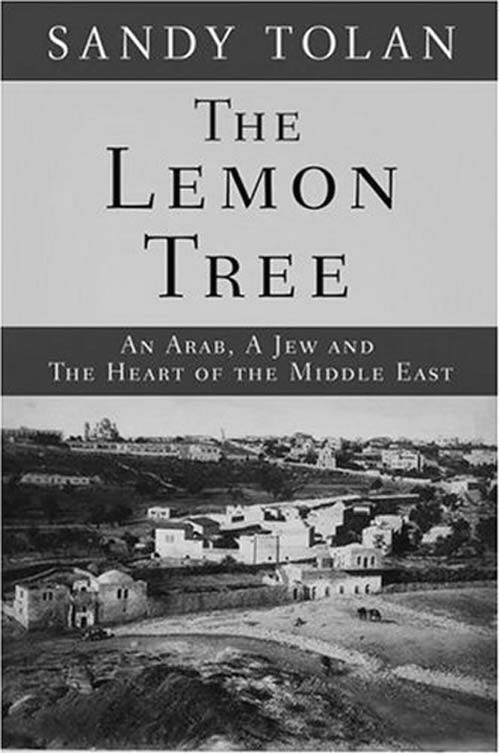 The Lemon Tree: An Arab, A Jew, and The Heart of the Middle East
Written by: Sandy Tolman
Published by: Bloomsbury
It's only once in a very long while that a journalist encounters a story as powerful as the one unearthed by Sandy Tolan.

It was while he was researching a piece on the 50th anniversary of the 1948 war of Israeli independence that Tolan first heard of Dalia Eshkenazi and Bashir Al-Khairi, an Israeli woman and a Palestinian man, oddly and poignantly linked by history.
The Eshkenazis, Jewish refugees from Bulgaria, arrived in the brand new state of Israel in 1948. They were taken to the town of al-Ramla where they were settled in an empty home. Four months earlier, that house had been abandoned by the Khairi family who'd fled - imagining they'd be back the next day - seeking refuge from fighting.

The Eshkenazis had an infant named Dalia. The Khairi's son, Bashir, was 6 at the time.
Twenty years passed. Then, one day, as Dalia was home alone in her parents' house on break from university, there was a knock on the door. It was Bashir.
For nearly two decades he and his family had been living in exile, dreaming of the home they'd left behind. When the 1967 Six-Day War changed boundaries, it suddenly became possible for Bashir to travel to Ramla by bus. He arrived at the door of his former house and, against all odds, Dalia invited him in.

Thus was forged the most unlikely of bonds, continued over the course of decades through visits, letters, and heartfelt dialogues. Dalia has long believed that between two people of goodwill there is no issue that cannot finally be resolved. Bashir - whose youthful anger drove him deep into the Palestinian resistance and who has since spent a significant portion of his life in Israeli jails - does not necessarily share her conviction. But he has never ceased believing in Dalia's personal goodness.
Tolan does a beautiful job of juxtaposing the stories of these two families. No novel could be more compelling.

The story of the Eshkenazis is traced as they face terror and near death in Bulgaria - and then are given a chance at rebirth in Israel. During the same years, Tolan relates, the Khairis were making a family and building a home - one that they imagined would house their children and their children's children.
That the futures of these two well-intentioned families should collide - and that the happiness of one would mean the devastation of the other - is so awful that it's almost impossible to grasp.

Tolan assembled this story, which grew out of a documentary originally produced on public radio, through months of interviews and research. Hugely to his credit, Tolan never tries to imagine how things might have looked or felt - he relies only on verifiable accounts.
But in this case, no imagination is needed. The details Tolan was able to glean are breathtaking in their poignancy: Dalia, as a little girl, ripping the Muslim crescent off the gate of her home because it made her uncomfortable; Bashir as a young man primping in front of the mirror in the West Jerusalem bus station so he'll look good when he sees his old house again; Bashir's father, Ahmad, weeping as he caresses fruit from the lemon tree he planted in the yard of the house decades earlier.

Don't imagine, however, that this story offers any answers. Dalia and Bashir have never been able to agree on a solution to the larger dilemma (she favors a retreat to Israel's pre-1967 boundaries and a two-state solution; he continues to insist on a full restoration of the land to the Palestinians). But due to Dalia's growing conviction that the house should never have been taken from the Khairis, she has since turned it into a kindergarten for Palestinian children living in Israel.
This book will not necessarily make you more hopeful about finding peace in the Middle East. But it will tell a story that will haunt you long after you put it down. And it will certainly be one of the best works of nonfiction that you will read this year.