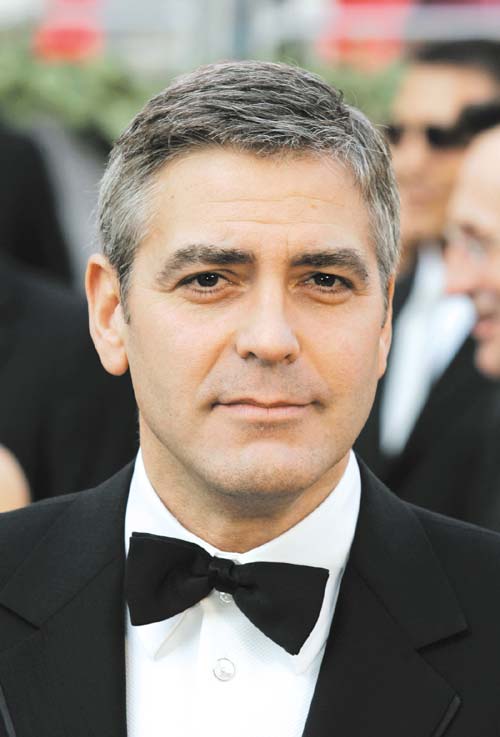 George Clooney was only 4 years old when Edward R. Murrow died in 1965, but he has revered the legendary CBS newsman for about as long as he can remember.
His new movie "Good Night, and Good Luck" is really homage to two men - Murrow and Nick Clooney, the actor's dad, a onetime Cincinnati news anchor who often took his son to work with him.
"I grew up on a newsroom floor, watching my father work with ... these really wonderful reporters, watching them piece a news show together, and Murrow was always the high-water mark that everyone aimed for," says Clooney. "So, it was my love of that, and it was certainly a tip of my hat to my dad and the sacrifices that he's made over the years."
Clooney does his father proud in "Good Night, and Good Luck," a movie he directed, co-wrote and appears in.
This unusual and powerful 90-minute film - shot in black and white - chronicles a narrow period in the '50s but has timely relevance for journalism and America in 2005.
It was in a climate of fear that Murrow battled corporate and sponsor skittishness, and a threat of personal reprisals, to take on Senator Joseph R. McCarthy and his witch hunts for Communists on "See It Now," Murrow's CBS broadcasts of late 1953 and 1954. Newspapers had been writing about the growing threat of McCarthyism, but it was Murrow's programs that turned the tide and proved the enormous power of the fledgling television medium. Particularly damaging was the "See It Now" of March 9, 1954, in which Murrow and producer Fred Friendly presented clips from a number of McCarthy's speeches to let the junior senator from Wisconsin reveal himself in his own words.
In "Good Night, and Good Luck" - the title was Murrow's signature sign-off - David Strathairn gives a beautiful and nuanced performance as Murrow, and Clooney deliberately tones down his own charisma (and the real man's "bombast," he says) to play Friendly. Grant Heslov, Clooney's co-writer and production partner, plays Don Hewitt. Robert Downey Jr. and Patricia Clarkson are producer Joe Wershba and his wife and newsroom colleague Shirley.
The large, fine ensemble cast also includes Frank Langella as CBS Chairman William S. Paley, Jeff Daniels as CBS executive "Sig" Mickelson and Ray Wise as Don Hollenbeck, a tragic local CBS newsman who was relentlessly accused by a prominent newspaper columnist of being "pink."
And McCarthy?
He plays himself, thanks to archival footage.
"We wanted to use McCarthy's own words, much the way that Murrow did in his show. We thought that that would be in the end most equitable," Heslov says. "We also talked a lot about who we would get to play McCarthy, if we actually cast somebody ... and we realized that nobody would be believable. ... (People) would think that they were over the top, really going overboard, and then we would get nailed for that. So, at the end of the day, we decided, let's use the real footage."
To make these inserts seamless, they decided to shoot the entire film in black and white - which Strathairn believes was a great move.
"Television was all black and white then," he says. "I have never even seen a color picture of Murrow."
It's also rare to see a photo of Murrow, who died of lung cancer at age 57, without a cigarette in his hand, and so Strathairn had to take up smoking for the film. Though Clooney did not want him to do an impersonation of Murrow, as they faithfully re-created his words and the camera setups, Strathairn tried to suggest the man's presence.
"In this television moment, which is where his public presence mushroomed out from radio, there were images that were iconic," Strathairn says.
Clooney and Heslov approached the project as journalists would, painstakingly double-checking all their facts and using two sources for every scene. They say any slip-up would give critics with an agenda ammunition to "marginalize" their film.
"There's a certain revisionist history going on that McCarthy was right and Murrow was a traitor," Clooney says.
The movie opens and closes with the 1958 speech that Murrow gave to the Radio and Television News Directors Association convention, about his fears about where television was heading. (The speech ended, "This instrument can teach, it can illuminate; yes, it can even inspire. But it can do so only to the extent that humans are determined to use it to those ends. Otherwise, it is merely wires and lights in a box.")
Clooney insists "Good Night" is not a statement about the current political situation, even though he's known as one of Hollywood's most outspoken liberals, and his film is coming out at a time of debate about the Patriot Act.
"The other thing we thought was important was to talk about the dangers of allowing fear to erode away civil liberties, because that's always a dangerous step," he says. "We do it every 30 years or so. We panic, we get blown up at Pearl Harbor, and we grab up all the Japanese-Americans and throw them into detention camps. The good news about it is that we can fix it. We lose our minds, we get a little crazy, we get a little scared, and usually someone capitalizes on that for their own gain, and then we fix it, and the main reason we fix it is because of the newsmen."
He thinks there are many fine journalists today - Brian Williams and Bill Moyers included - but neither he nor Strathairn believes there could be another Murrow today.