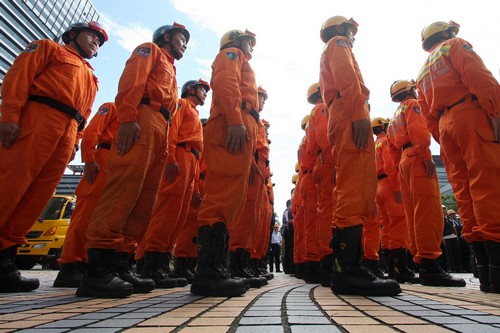 Agricultural and fishery losses from Typhoon Morakot which swept Taiwan over the weekend were estimated at NT$6.85 billion (US$208 million) as of yesterday, according to the newest government statistics.
Tallies compiled by the Cabinet-level Council of Agriculture (COA) showed that the storm damage figure is the fourth-highest in 18 years.
A total of 49,723 hectares of farmlands were devastated by Morakot, with banana plantations on some 5,356 hectares suffering the biggest blow, followed by papaya, guava, bamboo and vegetable farms.
Poultry and animal losses amounted to NT$737.59 million, with 2.7 million chickens and 709,000 ducks perishing in the storm. Pig farmers reportedly lost a total of 80,815 pigs.
Fisheries losses reached a new high of NT$2.91 billion, exceeding the NT$2.43 billion recorded when Typhoon Herbert hit in Aug. 1996, COA tallies showed.
A combined 5,832 hectares of fish farms in southern Taiwan's Tainan, Pingtung and Kaohsiung counties were badly damaged by Morakot - the worst typhoon to hit the south in 50 years.
Losses in the forestry sector were estimated at NT$16.36 million, while agricultural facilities suffered damage amounting to NT$168.32 million, and 73 hectares of farmland were washed away, according to the COA.
Some 10 cities and counties - Pingtung, Kaohsiung, Chiayi, Yulin, Tainan, Hualien, Taitung and Taichung counties as well as Tainan and Chiayi cities - are eligible to apply for COA cash subsides in view of the severe damage caused by Morakot, the council said.
Fourteen cities and counties, including the 10 mentioned above, are also eligible to apply for low-interest loans, the COA said, adding that the other four are Taichung, Changhua and Miaoli counties and Taichung City.
As a result of the storm damage, vegetable supplies at the Taipei Vegetable and Fruit Market yesterday fell to 1,090 tons, a decrease of 78 tons compared to the last trading day on Sunday. The market was closed on Monday.
Strong demand drove vegetable wholesale prices up to NT$32.9 per kg yesterday in the market - an increase of 17.3 percent. Fruit supplies rose by 192 tons to 562 tons.
In view of the tight local supply of vegetables and the surging prices of staple commodities in the world market, COA officials are concerned that the prices of other food items, such as pork, chicken, eggs and fish, will soar in the coming three weeks.