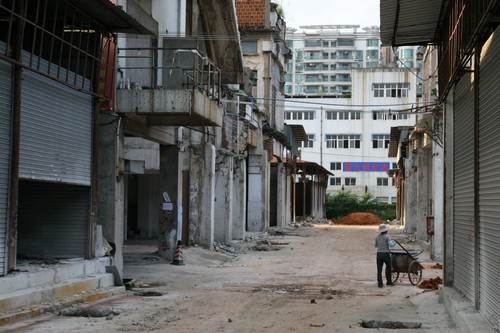 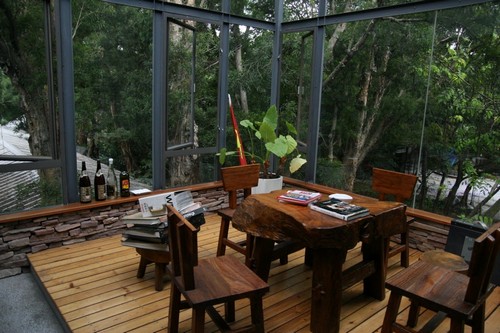 He Jiankiang is not a romantic. He doesn't pine for a lost China buried under skyscrapers. But when he heard that an old factory at the edge of town was being converted to office space for creative types, the architect leapt at the chance to move.
"In the past, there was nobody thinking about this kind of thing ... about what creative people need," He says from his balcony, overlooking old warehouses and machine rooms at the Yangcheng Evening News Creative Industry Zone in Guangzhou, southern China. "Nobody was thinking about what the future would be."
Spurred by the unlikely success of a factory-turned-art-space in Beijing called 798 and a desire to diversify the economy, cities across China are converting dozens of abandoned factories into art galleries, industrial-chic office space, and entertainment destinations. Many that aren't yet repurposing old industrial sites are drawing up plans - motivated by hope of profits or fear of criticism from higher-ups for failing to follow the latest trends in city development.
"China's investing heavily in the knowledge worker writ large, and this has become another part of that investment," says Eugenie Birch, chair of the University of Pennsylvania's Department of City and Regional Planning. "And when China does something, it does it at full force."
The 偀reative industry' concept, born overseas in the mid-1990s, took hold here a few years ago, when government leaders began referring to it in speeches and planning documents.
Projects are springing up across China, from Shenzhen to Hangzhou to Chengdu. They aim to attract artists, architects, photographers, designers, and advertising firms - the core of what China has labeled "the creative industry." Beijing has more than 20 such districts, and Shanghai more than 70, though not all are factory conversions.
The Yangcheng project, conceived two years ago, is one of at least seven large-scale projects in Guangzhou under construction, with varying degrees of official support. They include a former plastics factory and a shipping warehouse. All offer cheap rent and cavernous workshops.
"We've been opening up our economy for so many years, and it's all been so fast, but it's reached a level where we need to change our development strategy," says a spokeswoman for one of the city's larger creative industry zone projects, who cited company policy against speaking with foreign media in requesting anonymity. "The whole economy has to change to develop this higher-level work."
The fast, large-scale way factory creative space has taken off is a very Chinese phenomenon, says Michael Keane, an associate professor at the Queensland University of Technology in Brisbane, Australia. Planners here have long grouped businesses by industrial types.
"The way the Chinese see it, creativity is just like every other industry, so you put everyone in clusters and try to aggregate their capabilities," he says. "They want to have creativity in a box, but a lot of creativity requires out-of-the-box thinking."
The iconic project that showed what disused factory space could achieve, 798, grew from a cheap outpost for artists into a major tourist spot earlier this decade. As its popularity soared, its grass-roots nature changed, and it is this second, commercially minded stage that planners hope to replicate.
Though some say that will drive up prices and stifle creativity, those things aren't inevitable, says Li Xiangqun, an art professor at Beijing's Tsinghua University and a sculptor who has offices at 798. The financial desires of real estate developers don't prevent artists from doing good work, he says.
Yet in Guangzhou, the massive focus on creative industry projects has already begun to foster sameness. Lots of simultaneous construction means developers must compete to attract creative firms.
Chen Zhiyan, a commercial art gallery owner who recently moved into the Xinyi International Club, a converted plant on the banks of the Pearl River, says poaching has already begun. A close friend of his is building his own creative industry zone up the road and is looking for tenants.
While such zones threaten to put profit above creative output, the overall effect is good, says Professor Keane. "This is about modernization and modernity, image building," he says. "It's a positive force, the ideas that come with the whole project can open people's minds" - and encourage policymakers to think more creatively about urban development.
As for He, the architect, he says life is going well. His new digs suit his quirky staff, and he's been contracted to consult on two new creative industrial zones being built. And if this experiment doesn't work out, he'll just move somewhere else.
"Three years from now, will this place exist? No one knows," he says. "But the thing about change in China is, we're used to it."