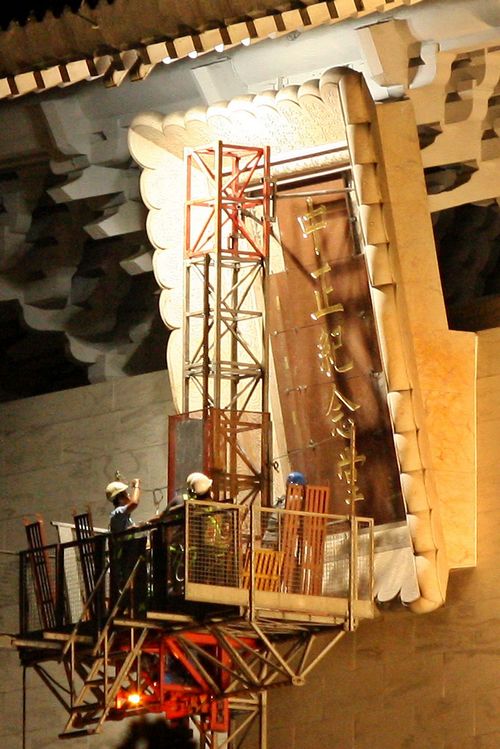 Workers removed the name "Taiwan Democracy Memorial Hall" and replaced them with the old name "Chiang Kai-shek Memorial Hall" on the Taipei landmark yesterday despite accusations that the government was praising authoritarian rule.
The full-day closure of the hall, built as a tribute after Chiang's death in 1975, and of its surrounding park was not announced beforehand, provoking criticism from the opposition.
The previous Democratic Progressive Party administration had the name of the late dictator removed in 2007 amid a dispute between the Ministry of Education and the Taipei City Government over control over the hall in downtown Taipei. Work began at 8:10 a.m. after an estimated 900 police closed off the park and surrounded the location with barbed wire just before midnight Sunday. Workers on an elevator moved up to remove the seven Chinese characters for Taiwan Democracy Memorial Hall and their background, for a total of 21 pieces, weighing a combined 751.76kg.
Putting up the old characters for Chiang Kai-shek Memorial Hall into the empty plaque started at 1:30 p.m and was completed by 7 p.m., though the park would not be reopened until 4 a.m. today.
Protesters turned up outside the venue, but unlike during the first change two years ago, no major clashes were reported. The opponents held a silent sit-in protest in front of the main gate. DPP members of the Taipei City Council were refused access to the site. Taipei Mayor Hau Lung-bin denied accusations that too many police had been mobilized for the operation.
The inscription on the tall gate at the front of the complex near Chungshan South Road, reading "Liberty Square," was to remain, despite also having been introduced by the DPP government.
Yesterday's operation cost an estimated NT$1.1 million, adding to the bill for the original change of NT$2.3 million. The characters removed yesterday will be kept at a storage facility, reports said.
Memorial Hall manager Tseng Kun-ti defended the decision to begin the operation in the middle of the night, without making any announcements moving the machinery into the park shortly after midnight early yesterday.
Tseng also defended the legality of the change, saying an attempt at the Legislative Yuan to amend relevant regulations failed last year, so yesterday's changes were only a return to the legal situation.
DPP Chairwoman Tsai Ing-wen said President Ma Ying-jeou had promised public hearings to discuss the name for the hall, but she had never heard or seen of those meetings again. Ma's government was making it a regular practice to do things without consulting the public, Tsai said.
Presidential spokesman Wang Yu-chi retorted that the Ministry of Education had held three hearings during the run-up to yesterday's restoration.
DPP legislative whip Wang Sing-nan said the government was hurting the feelings of the victims of the Chiang era's martial law regime and reopening old wounds.
Chiang was the fourth most murderous dictator in modern history following Stalin, Mao Zedong and Hitler, said Wang, brandishing statistics published by the University of Hawaii showing the late president was responsible for more than 10 million deaths.
DPP lawmakers saw a variety of motives for the change, including government plans to attract more Chinese tourists to the site, and Ma's current campaign for chairman of the ruling Kuomintang.