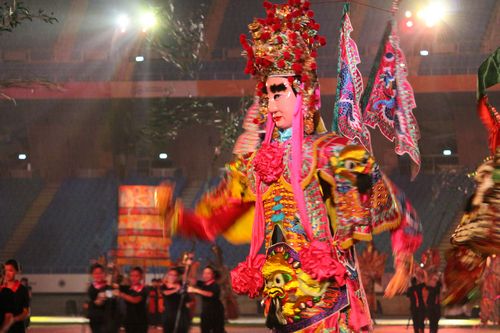 2009 World Games light up the sky in Kaohsiung

President Ma Ying-jeou declared the 8th World Games in Kaohsiung open yesterday, but Chinese athletes stayed away. His presence had only been assured on Tuesday, when the International World Games Association confirmed his invitation as the head of state of the host country.
"I now declare open the 8th edition of the World Games in Kaohsiung 2009," he said.
Before Ma gave the start for the 11-day event, Kaohsiung Mayor Chen Chu said she felt an incomparable honor that Kaohsiung had been able to become the host to the most important international sports happening outside the Olympics, hosting 5,000 athletes and trainers from 105 countries.
"We have different languages and skin color, but we hold to be basic spirit of the World Games, the spirit of peace, friendship and cooperation," she said. IWGA President Ron Froehlich said all participants could feel the earnestness of the host city and the many aspects of the event at the environmentally friendly main stadium.
"We will witness first-class competitions by complement of the Taipei government and Kaohsiung in this new stadium which is completely eco-friendly," he said.
"There will be many winners and losers, however, to have the opportunity to compete in this world event, makes all winners," Froehlich said. The opening ceremony was also attended by former Premier Frank Hsieh, who as mayor of Kaohsiung first applied to host the games, and by opposition Democratic Progressive Party Chairwoman Tsai Ing-wen. Former President Lee Teng-hui was also present, reports said.
The foreign guests included Marcus Stephen, a former weightlifting gold medalist at the Commonwealth Games now President of Nauru, one of Taiwan's rare diplomatic allies.
The most noted absentee at the opening ceremony was the team of athletes from China. They reportedly decided to stay away because their country does not recognize Taiwan as a sovereign and independent nation. Therefore, they wanted to avoid being at the stadium as Ma was speaking in his capacity of Taiwan's head of state, reports said. During the parade of the country teams, one woman held up a board with China's name and another carried the country's five-star flag, but no athletes appeared.
By noon yesterday, none of the Chinese athletes had registered, according to games officials. The 22 early registrants from China were mainly journalists and officials. The first competition on the agenda for participants from China was dragon boat racing scheduled for 9 a.m. today, reports said.
Mayor Chen said she respected the choice of each country's team to attend the opening or not.
During the afternoon, supporters of Taiwan Independence appeared outside the site carrying placards reading "Taiwan is my country, "One China, One Taiwan," and "Taiwan is not China."
DPP activists handed out small flags with Taiwan written in English and in Chinese characters to passersby on their way to the stadium. Members of the audience and many foreign athletes were seen waving the flags during the opening ceremony.