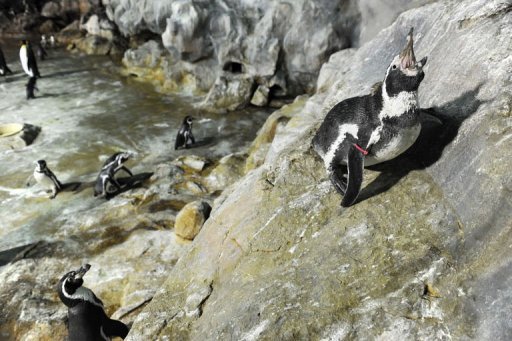 The hunt was on Monday for a penguin that scaled a sheer rock face to escape from a Tokyo zoo, and was last seen swimming in a river in the Japanese capital.

The one-year-old Humboldt penguin was snapped bathing in the mouth of the Old Edogawa river, which runs into Tokyo Bay, after fleeing its home in the east of the city in an echo of the hit animated film Madagascar.

Takashi Sugino, an official at Tokyo Sea Life Park, said the 60-centimetre (24-inch) bird appeared to have got itself over a rock wall twice its size and made a run for it.

"We first noticed the penguin might have fled when the director of a neighbouring zoo e-mailed us Sunday, with a photo," said Sugino.

A second picture provided by a visitor allowed keepers to identify the errant bird as one that hatched last January.

Sugino said it was not entirely clear how the creature had managed to get out of the enclosure it shares with 134 other Humboldt penguins.

"Of course it can't fly, but sometimes wildlife have an 'explosive' power when frightened by something. Maybe it ran up the rock after being surprised," he said.

In the 2005 computer animated film Madagascar, penguins are among a group of animals that mount an escape as they are being transported.

Zoo officials were Monday scouring the area where the Tokyo penguin was last spotted in the hope of recapturing it.