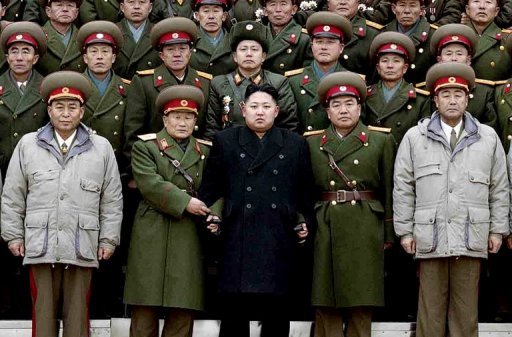 North Korea on Sunday praised its young new leader as "the genius among the geniuses" in military strategy in a film aired on his birthday, the first since he took command after his father's death.

In a documentary about Kim Jong-Un's virtues, state television showed the leader driving a tank and giving orders to troops in artillery, navy and air force units, lauding his "excellent military leadership".

"The respected comrade Kim Jong-Un is perfectly versed in all military strategies and... displays excellent military leadership," said the film, over images of soldiers jumping in joy at seeing Kim on field trips.

Communist North Korea has proclaimed Jong-Un, who is believed to be in his late 20s, as "great successor" to his father Kim Jong-Il, who died of a heart attack on December 17.

The heir has been appointed the supreme commander of the North's 1.2 million-strong military, which under the regime's "Songun" ideology enjoys priority treatment in all fields of policy.

Kim Jong-Un was a relative unknown until recently and has no military experience.

However, the documentary said he wrote his first thesis on military strategy at the age of 16, after sleeping only three to four hours a night and often skipping meals to study.

"Our great general Kim Jong-Il... called him (Jong-Un) the multi-talented, genius of the geniuses in military knowledge," it said, describing him as "the spitting image" of his father and grandfather in personality and leadership.
Since Kim Jong-Il's death, the reclusive North's state media have launched campaigns to idolise Jong-Un in a similar way to his late father and his grandfather, founding president Kim Il-Sung.

The birthdays of Kim Jong-Il on February 16 and of Kim Il-Sung on April 15 are two of the communist country's most important holidays, often marked by fireworks, extra food rations and other events.

It was not known whether the North has designated January 8 as a public holiday and the TV documentary did not directly address the new leader's birthday.

The film did not spell out when the footage was taken. Some of it showed father and son together, but state media have also reported that Kim Jong-Un visited a tank division on January 1.

Jong-Un's birthday was not marked as a holiday in North Korean calendars for 2012, South Korea's Yonhap news agency said. Those would have been printed before he took over the leadership.

The North's media say the young leader will continue the father's Songun policy.

The policy has been blamed for the deaths of thousands of people to starvation as the isolated, impoverished regime diverts resources to its armed forces, which are the world's fourth largest.