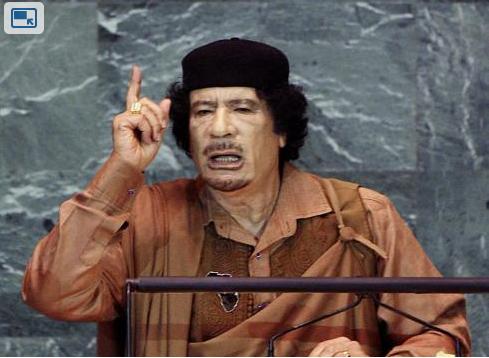 More than 1 million Libyan students returned to school Saturday to start the first year in which the whims, politics and wacky philosophies of Moammar Gadhafi will not drive the curriculum.

Revamping the curriculum was only one of the tasks the new Education Ministry faced in preparing for the first school year following the eight-month civil war that killed thousands and left parts of some of Libya's biggest cities in ruins.

Education Minister Suleiman al-Sahli told reporters in Tripoli Saturday that many schools were damaged in the fighting and more than a dozen were completely destroyed. Elsewhere, crews had to clear land mines from school yards to make them safe for students, he said.

Gadhafi dominated the education system throughout his 42-year rule, which ended when armed rebels stormed into Tripoli in August. Gadhafi was killed in October during his capture by rebels.

The former leader's prominence in teaching materials meant that they had to be thrown out, al-Sahli said. The old history books for example, emphasized Gadhafi's 1969 coup but failed to mention the king he overthrew or Libya's gaining independence from Italy in 1951. All political materials were taken from Gadhafi's largely incomprehensible governmental guide, the "Green Book."

The new materials will give students a more complete education.
"Instead of teaching them the fabricated history of Gadhafi, we will provide the true history of our nation," al-Sahli said.

But creating the new materials has been difficult.

Al-Sahli said Libya ordered 35 million new textbooks to be printed in neighboring Tunisia but had only distributed 1 million so far. Border closures and strikes by truck drivers and port workers hampered their transport to Libya, he said. In the meantime, students will receive printed worksheets.

The new materials will boast the tricolor flag of the rebel movement and teach the history of the revolution, he said. A "Political Awareness" class that spread Gadhafi's view of socialism has been replaced by one called "National Awareness," which will teach patriotism and the basics of democracy.

UNICEF, which Gadhafi banned from the country in 2006, has returned and is helping the government rehabilitate schools, provide counseling for children traumatized by the war and assess future needs.

Katrin Imhof, a UNICEF education officer, lauded the progress so far, saying the government was adapting to a difficult task.

"Some schools were literally destroyed, and you can't build a new school in two days," she said. "There have to be alternative solutions so all children can get a quality education."

Al-Sahli marked the year's start by touring a Tripoli elementary school, where children stood and broke into the new Libyan national anthem when he entered their classrooms.

He promised students they'd have more fun at school than they did in the past, and said he'd seek new sports facilities and expand music programs, something lacking under Gadhafi.

One music class he visited had only one xylophone. Al-Sahli said it was hard to find music instructors and told the teacher, "If you have any friends who know how to teach music, tell them to come to us."