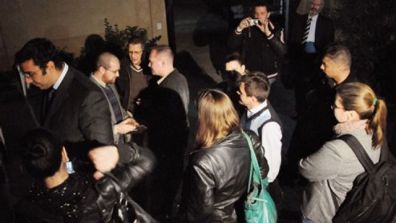 Egyptian security forces raided the offices of three U.S.-based agencies and other non-governmental organizations in what the government said was an investigation into foreign funding “and associated crimes,” the state-run Middle East News Agency said.

The places targeted include the Cairo office of the Washington-based National Democratic Institute, a U.S. government funded group that supports development of political systems in newly democratic countries.

“They are clearing out all of our documents and computers,” Lila Jaafar, a program director for the organization, said by telephone during the raid.

The U.S. condemned the raids. Human rights groups questioned the Egyptian government’s commitment to democracy since the ouster of former president Hosni Mubarak in February.

The raids may affect whether Egypt receives $1.3 billion in U.S. aid. “We do have a number of new reporting and transparency requirements on funding to Egypt that we have to make to the Congress,” Nuland said. “The Egyptian government is well aware of that.”

U.S. Ambassador to Egypt Anne Patterson contacted the Egyptian prime minister and the military to express concern about the raids and urge “appropriate action,” Nuland said.

Egypt’s military rulers, who took over from Mubarak, have been accused of using excessive force against protesters during recent demonstrations, a charge they deny. The army, which has accused “foreign hands” of fomenting unrest in the country, has come under renewed pressure from protesters to hand over power to civilians.

“This is a campaign that has been in the making for a while,” Gamal Eid, a human rights lawyer, said by telephone. “The campaign will escalate to silence all the voices that have criticized violations by the military.”

“The raids today represent an escalation of repression unheard of even during the Mubarak regime,” said David Kramer, president of Freedom House, in a written statement.

“It is the clearest indication yet that the Supreme Council of the Armed Forces, the military chiefs now ruling Egypt, has no intention of permitting the establishment of genuine democracy.”

Kenneth Wollack, president of the National Democratic Institute, said, “Cracking down on organizations whose sole purpose is to support the democratic process during Egypt’s historic transition sends a disturbing signal.”

The International Republican Institute, in a written statement, called the raid “confusing” because the group had been invited by the Egyptian government to observe the third phase of elections on Jan. 3 and 4.

“It is ironic that even during the Mubarak era IRI was not subjected to such aggressive action,” the group said in a statement.

Senator John McCain of Arizona, the most senior Republican on the Senate Armed Services Committee and chairman of the IRI’s board, issued a statement calling the raids “unjustified” and “reminiscent of the practices of the Mubarak regime.”

Separately, a Cairo court today acquitted five police officers of charges of killing protesters during the anti- Mubarak revolt that started in January, Mena reported, in a move likely to anger protesters who have been demanding punishment for those behind the killings.