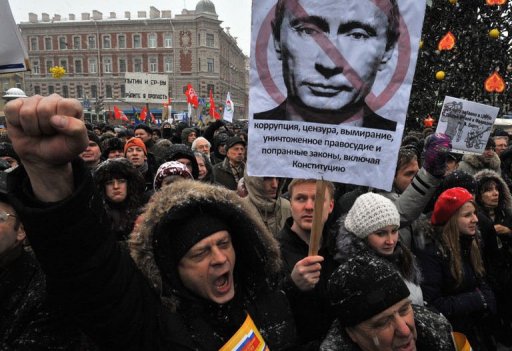 Russian protestors who shook the authorities with mass protests against the rule of Vladimir Putin are set to hold a new rally Thursday against the detention of a prominent left-wing activist.

Over 2,000 people have vowed on social media network Facebook to attend the rally in Pushkin Square in central Moscow which has not yet been authorised by the municipal authorities.

The rally was called after a Moscow court this week ordered the detention of left-wing activist Sergei Udaltsov for 10 days despite growing alarm for his frail health after he went on hunger strike.

The meeting is expected to be nowhere near the size of last Saturday's mass rally against allegedly rigged elections and Putin's domination of Russia which brought tens of thousands out onto the streets.

But it is expected to reflect genuine anger over the detention of Udaltsov. Organisers are hoping that there will be no new confrontation with the security forces, despite the lack of authorisation.

Their Facebook page is now calling the event a "gathering for the freedom and life of Udaltsov and other political prisoners" rather than a protest. But it is also calling for a "mass" turnout.

While Udaltsov's radical left-wing views are not shared by all in the anti-Putin protest movement, his plight has become a rallying cause for the opposition angered by the harsh behaviour of the Moscow courts.

Udaltsov had already served a fortnight sentence for taking part in a protest after the December 4 parliamentary elections and his extra 10-day term was part of a punishment dating back to October he had not served out.

There is particular anger among the opposition over the strict rulings of Moscow's Tverski district court magistrate Olga Borovkova who sentenced Udaltsov and a number of other prominent opposition protestors this month.