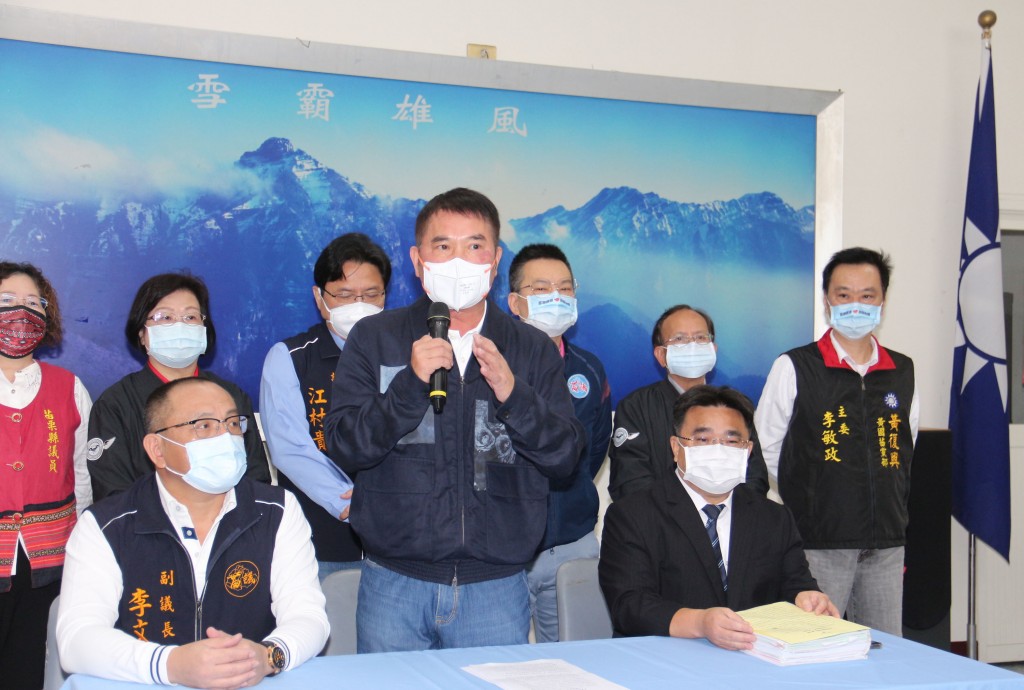 TAICHUNG (Taiwan News) — It’s not every day that a major local politician holds a press conference to announce he’s an adulterer and once stabbed his classmate. But this is Miaoli, which is infamous for its outrageous politics.

The KMT’s nomination for their Taoyuan mayoral candidate isn’t the only one to have gone spectacularly badly; the party’s nomination for Miaoli county commissioner has also been a fail of epic proportions.

After Kuomintang (KMT) party chair Eric Chu (朱立倫) visited Miaoli to consult with local leaders, he announced on May 14 that Legislator Hsu Chih-jung (徐志榮) would be their candidate. This caught Miaoli County Council Speaker Chung Tung-chin (鍾東錦), who had wanted to be the nominee, totally off guard. He then said Hsu wasn’t picking up his calls and called the nomination process “shady.”

Chung went on to state he wasn’t ruling out running for county commissioner “to the end” anyway, presumably by leaving the party or joining another one, thereby splitting the pan-blue vote.

Chu and the KMT's top-down nomination, which skipped the more standard polling or negotiations between potential candidates, is the same thing that got them in so much trouble in Taoyuan because it comes across as arbitrary and unfair, though the party does have the right to do it this way. But in this case, it was even worse; apparently, Chu and the KMT election committee hadn’t bothered to consult — or even inform — Hsu about his own nomination.

That’s a very curious and embarrassing oversight on Chu’s part. Like Chung, Hsu was also totally caught off guard by his nomination, stating that from the start, he’d had “no desire” to run and had called on the party to pick someone else.

After having spoken to the party higher-ups, Chung then held his press conference. In it he attacked those who were “spreading rumors” and declared he would resign if there was any shred of proof he had a criminal record for murder or rape, but also that he’d sue those who continued to spread rumors.

In an attempt to quell KMT higher-ups' fears that someone rumored to be a murderer and rapist might not be the look the party was going for during an election, Chung declared he would lay out the entire sequence of events as to his criminal record.

Saying it was “light years” away from being rape, he admitted to having been convicted of adultery. He claimed he had been “young” and “naive” in his 20s, hadn't known the woman was married, and he later regretted his mistake.

He said he had been officially disciplined for that as well as for attempted murder — but stressed he had never served any jail time. The attempted murder he said had also occurred when he was in his 20s, when he got into an altercation with a fellow student while drunk.

Claiming it was self-defense, Chung said he had slashed his classmate across the stomach with a knife, resulting in many stitches. He claimed he had asked for forgiveness, which was apparently given, and that he is to this day “extremely good friends” with the victim and his family.

He went on to deny he had ever had any ties to the underworld or been in a gang. This he followed up with, er, the ill-advised comment that “The only gang I’ve ever joined is the Kuomintang!”

Apparently, local political leaders weren’t overly relieved that the rumored murderer and rapist is now an openly admitted adulterer and stabber. Local leaders, including former county commissioners, are reportedly lining up behind former Irrigation Association head Hsieh Fu-hung (謝福弘) and plan to pitch him to party central as their candidate.

Whomever the KMT nominee ends up being, this person will be the presumed frontrunner. Miaoli has traditionally been viewed as a KMT stronghold, though it could more accurately be described as a Democratic Progressive Party (DPP) lockout zone.

Miaoli has a large Hakka population, which has for historical reasons been suspicious of the domination of Taiwanese Hokkien speakers in the DPP. Non-KMT candidates have sometimes done well, but DPP ones generally don’t outside certain pockets of the county.

The DPP is running a former independent, Hsu Ting-chen (徐定禎), who joined the party only in 2019. The New Power Party (NPP) had attempted to get the DPP to unify behind them to promote NPP member Song Kuo-ting (宋國鼎), but the DPP chose not to, and it remains unclear whether the NPP will continue with a Song run.