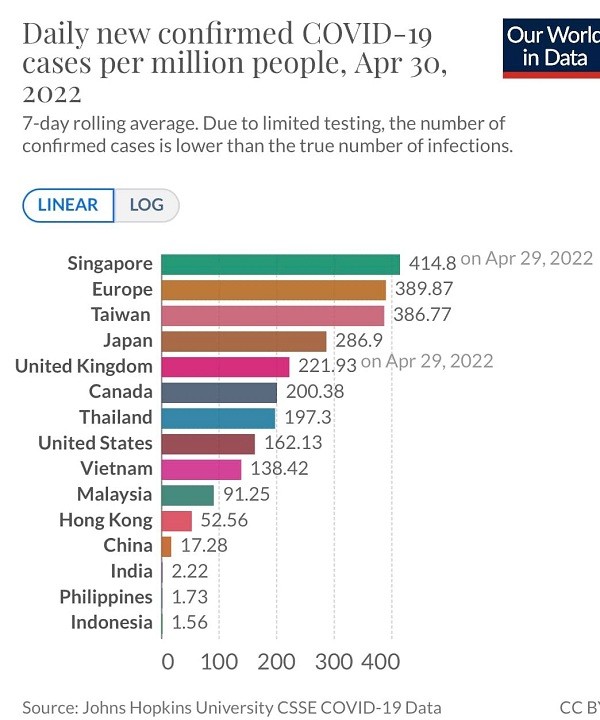 Chan, a public health professor at National Taiwan University, said in the post that the governments of many countries have imposed restrictive measures on their people, including social distancing, suspension of classes and business activities, and restrictions on international travel, in order to control the spread of COVID-19.

However, these measures have resulted in incomparable global economic losses, disrupted public and private services, and a negative impact on people’s mental health and well-being in the past two years, especially in women, young people, people with disabilities, low-income households, minorities, and people who have been prevented from going home due to strict border controls, he said.

Starting this year, many countries have changed course, deciding to pursue a policy of living with the virus to minimize the economic cost of the pandemic and its impact on mental health. These countries have strived to manage the public health risk instead of pursuing the all-out elimination of the disease, according to the post.

The measures other countries have taken to coexist with the coronavirus include ramping up the vaccination rate to nearly 100%, providing convenient access to sufficient and inexpensive tests, maintaining sufficient amounts of medicine and medical capacity to ensure immediate and effective care, removing border controls to allow international travel and trade flow to return to normal, and removing outdoor masking mandates to allow people to adapt to new safe epidemic prevention behavior, he said.

Taiwan is an island nation that thrives on global trade, so international interaction is more important to it than to many other countries, he continued. As the Taiwanese government considers how to coexist with the virus, it must reflect on adjusting border control measures to prevent the unmitigated spread of the disease while preserving economic prosperity, he went on to say.

Another border control measure countries have taken that Taiwan can consider is allowing people who have had three vaccine shots and tested negative to enter the country, Chan said.

He also pointed out that Taiwan’s seven-day rolling average of confirmed COVID-19 cases per million people is 387, which is slightly higher or about the same as the numbers (between two and 415) of countries Taiwan has a trade relationship with. In fact, he said, in the past week the number of Taiwan's confirmed local cases has been 46-113 times that of imported ones.