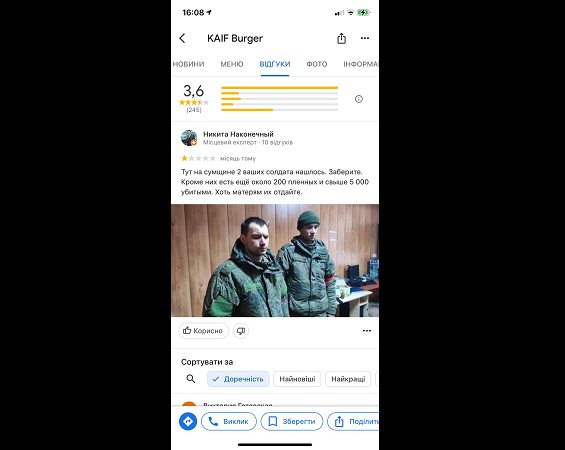 TAIPEI (Taiwan News) — As the Russo-Ukrainian War enters its third month and China-wary Taiwan takes note of weapons and strategies that have proven effective against Ukraine, one Kyiv native has reached out to share how non-combatants can contribute to the war effort.

When Russian forces launched their invasion on Feb. 24, Nikita Nakonechnyi and his girlfriend evacuated their ninth-story apartment — first to stay with his brother 10 kilometers away and then, as the front lines drew nearer, to his parents' house 60 km from the capital.

The sounds of pounding artillery and aircraft roaring overhead still fresh in his memory, Nakonechnyi said he and his family did what they could to aid their country's military, like purchasing bulletproof vests. His main contribution, however, was as a member of Ukraine's "creative army."

A media buyer by trade, Nakonechnyi said, "I'm not a soldier. I couldn't fight — never used a gun." Instead, he focused his energies on combating propaganda on Russian social media, such as claims NATO was responsible for the war and unsubstantiated rumors of a biological weapons program in Ukraine.

Initially, Nakonechnyi said he sought to convince Russian netizens of the scope of Vladimir Putin's "special military operation" and the resulting deaths. He said many responded with indifference, which surprised him: "When you write to Russians saying, 'We are dying here,' you don't expect them to say 'so what?'"

As a result, he decided to switch up his approach by turning to psyops. "After that, I and other media buyers started to make other ads," aiming to lower Russian morale with messages such as, "Sanctions will kill your economy! Grab all your money from the bank!"

Though Moscow barred access to Facebook and Twitter in early March to retaliate against those platforms' restrictions on Russian state-owned news, "We still have ways to make a panic there, and it helps," Nakonechyi said.

"I want to show how you can fight if a big country with a big army will attack, to show that even if you're not a soldier you can fight and help."

Hit them in pocket

With social media avenues limited, Nakonechnyi and others in the "creative army" found more unconventional means to show Russians the conflict might not be going as well as the Kremlin's media apparatus let on — with Google Map reviews, for instance. Nakonechnyi recalled that in a review of one Moscow restaurant, he uploaded a photo of a bombed-out Russian tank with the comment, "Food very good but a little bit burnt."

After a fire at a fuel depot in the Russian city of Bolgorod, which Russia alleges was caused by an attack by Ukrainian helicopters that crossed the border, Nakonechnyi said he and his associates sowed panic by warning Russian troops were leaving the city and that Ukrainians were coming.

"All these years, (China and Russia's) propaganda says they are so powerful ... but when they see these countries that don't exist can hit back, they will be scared," he said.

Nakonechnyi and other marketers in the "creative army" have created ads in other countries to raise awareness about Putin's war, while Ukrainians living abroad have visited the headquarters of companies to lobby them to suspend operations in Russia, as Nestle and many others did in March. The hope is that the jobs lost will further strain Russia's economy and ability to wage war.

When it comes to businesses, however, he said the most effective approach is not to explain how their money is "stained with (Ukrainian) blood" but how the invading country might not be able to make payments. In the case of Russia, it is being ravaged by sanctions and cut off from its foreign reserves.

As long as there is internet access, "Everybody in your country should understand every phone is a weapon," Nakonechnyi said but noted it is a double-edged sword.

For example, when uploading footage of Taiwan forces destroying an enemy asset, do not mention where the attack took place, as this could present a tempting target for enemy retaliation. Instead, videos of strikes can be posted with false information to confuse enemy forces and media. He gave the example "A Russian bomb destroyed Odessa (subway) station" (the city of Odessa does not have a subway).

In addition, citizens can be eyes and ears for the military by posting about the position of enemy tanks or other assets they see, and how many, so friendly troops or fighter pilots can swoop in for the kill.

The Russian and Ukrainian languages are similar but very different in pronunciation. Russians have a particularly hard time pronouncing "palyanytsia," a type of Ukrainian flatbread, and Ukrainians have used this to their advantage in situations where it is hard to determine friend from foe.

Nakonechnyi stressed that during a war, morale is key: "When you laugh, you're not scared."

While Russia hopes to instill fear in Ukrainians, it helps to understand that Russian ranks are filled with poor, uneducated, and often poorly equipped soldiers, he said, referring to a video showing captured Russian rations appearing to have expired in 2015.

When it comes to assisting the victims of an invasion, Nakonechnyi said, "A Ukrainian flag in L.A., okay it's good, but better to send money" or give a Ukrainian a job. Be specific about how sympathetic foreign nationals can help.

Looking for ways to hamper the Russian war machine, Nakonechnyi said he and his associates asked an engineer, "What do Russians need to make new tanks and aircraft," and were surprised by how many parts were not manufactured in Russia. To this end, he thanked Taiwan for ending semiconductor exports to Russia.