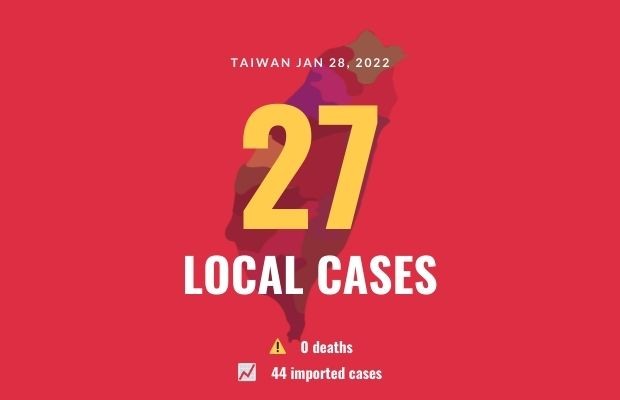 Chen said the local cases include eight males and 19 females ranging from under five years old to their 60s. Of these cases, 12 were tied to three clusters in Taoyuan, seven to a real estate agent in New Taipei, four to the Port of Kaohsiung, and four to an outbreak at the Evergreen Resort in Yilan.

The 44 imported cases include 25 males and 19 females ranging in age from under five to their 70s. Of these, 14 tested positive upon arrival at the airport and 30 tested positive during quarantine.

Between Jan. 13 and Jan. 27, they arrived in Taiwan from the U.S. (eight cases), the Philippines (eight cases), China (five cases), Indonesia (three cases), Japan (two cases), Sweden (two cases), and Vietnam (two cases, with one case each from Bangladesh, the Netherlands, Turkey, the U.K., Austria, and Denmark. The country of origin for eight cases is still being investigated.

A total of 126 people have been removed as confirmed cases, while 14 cases are still under investigation. To date, 851 individuals have succumbed to the disease.