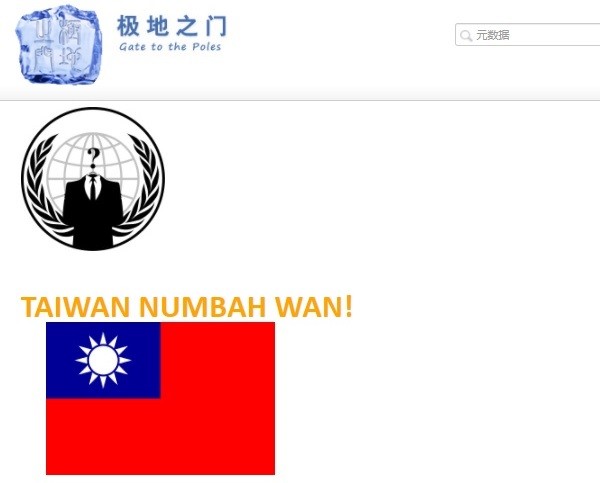 TAIPEI (Taiwan News) — Decentralized international hacktivist group Anonymous has hacked into a Chinese government website to upload the words "Taiwan Numbah Wan" and Taiwan's national flag and emblem, among other signs of defiance against the Chinese Communist Party (CPP) while also calling for a peaceful resolution to the crisis in Ukraine.

On Friday (Jan. 14), Anonymous hacked into www.polar.org.cn, a Chinese government website affiliated with the Polar Research Institute of China, a subsidiary of the country's Ministry of Natural Resources, according to Anonymous representative "Allez-opi_omi." The website has since been taken down. 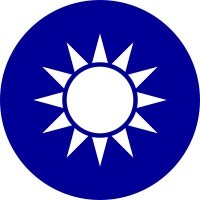 In anticipation of the administrator deleting the defacement of the website, the hacktivists saved an archived version on the Internet Archive's Wayback Machine. When asked how the group gained access to the website's back end, the Anonymous spokesperson said that they simply registered an account, logged in, "and the rest is history."

The hacktivists created a page under the "projects" section of the website titled "We are Anonymous!" Under "detailed description," the Anonymous logo appeared, followed by the "Taiwan Numbah Wan!" meme. This was a reference to a famous quote uttered by video game streamer AngryPug in 2015 to antagonize Chinese streamer Em0 during a match in the game H1Z1 .

Below the slogan was Taiwan's national flag followed by its national emblem. The next flag displayed was the black nine-pointed star and yellow discs first used during the Wuchang Uprising in modern-day Wuhan that the Republic of China Army used as its standard from 1911 to 1928.

The national flag of the Republic of China used from 1912 to 1928 appeared next. It consists of five horizontal stripes, with each color representing a different major ethnic group in China.

Next, is a video that plays Taiwan's national anthem. Like in its recent hack of a UN website, the group embedded the music video for "Fragile," a Mandopop song sung by Malaysian rapper Namewee (黄明志) and Taiwan-based Australian singer Kimberley Chen (陳芳語).

The video is full of satire directed at the Chinese Communist Party, from the extensive use of the color pink to symbolize the jingoistic Chinese nationals referred to as "little pinks" (小粉紅) to a giant, clumsy panda. Following Namewee's work is a video that plays the "The Anti-Communist and Anti-Russian Aggression Song," which was written by Chiang Kai-shek (蔣介石).

The rest of Anonymous' hack was dedicated to solutions to the current standoff between Russia and Western allies over eastern Ukraine. The hackers called for the creation of a "neutral grouping" of countries "wedged between NATO and Russia" that would include Ukraine, Finland, Belarus, Georgia, Armenia, Azerbaijan, and Moldova.

A paper by Quincy Institute senior fellow Anatol Lieven titled "Ending the Threat of War in Ukraine" was embedded at the bottom of the page. Like Lieven did in his paper, the hacktivists called for a referendum to be held in Ukraine's Donbass region on its ultimate fate.

Unlike the paper, however, which advocates a referendum on a union with Russia, Anonymous called for a referendum on whether to "follow a peace protocol or hand over the territories of Donbass to a United Nations peacekeeper administration." 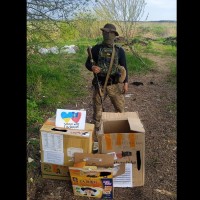