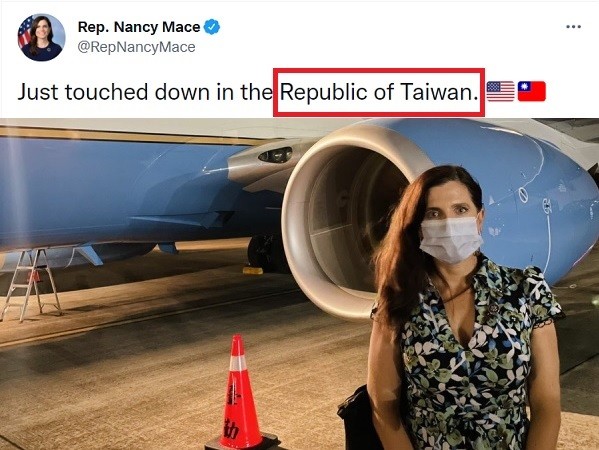 On Nov. 25, Mace took part in a 17-member, bipartisan delegation of U.S. representatives and congressional staff that made a surprise visit to Taiwan. The delegation, which was the second of its kind this month, had an "in-depth exchange of views with senior government officials on various important issues such as Taiwan-U.S. relations and regional security," according to a Ministry of Foreign Affairs press release.

At 11:17 p.m. that evening, Mace posted a photo of herself in front of the C-40 jet the group had arrived in and wrote, "Just touched down in the Republic of Taiwan," which was followed by emojis for the American and Taiwanese flags. Taiwan's official name is the Republic of China.

During an interview with CNN on Sunday, Mace said that she had written "Republic of Taiwan" as a "subtle but strong nod to the Taiwanese people" and their concerns about Chinese aggression. Mace pointed out that the Chinese embassy had called all five representatives on the delegation and demanded that they cancel the trip.

When asked to confirm whether her use of "Republic of Taiwan" had been intentional, Mace said, "Yeah, 100% it was." Mace said that many Taiwanese and Taiwanese-Americans had thanked her for the statement.

She said that one young woman had come to her in tears and thanked her for the gesture. The congresswoman said the statement was to express to the people of Taiwan that "we appreciate what they're doing. They are important to our economy, and economies around the world, and we want to make sure that their democracy and freedoms are protected."