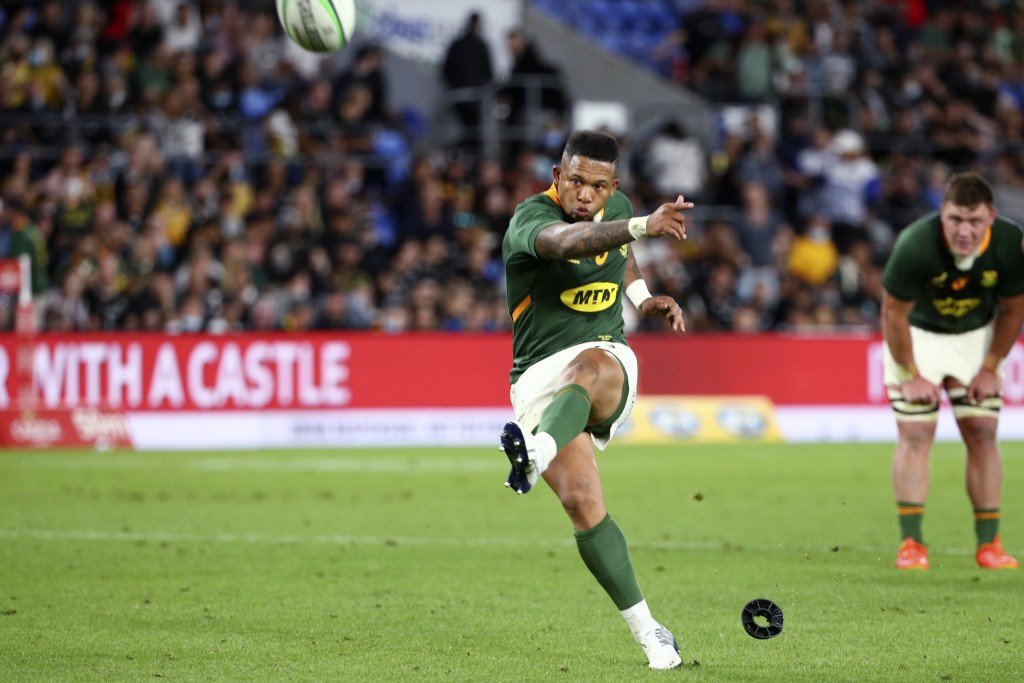 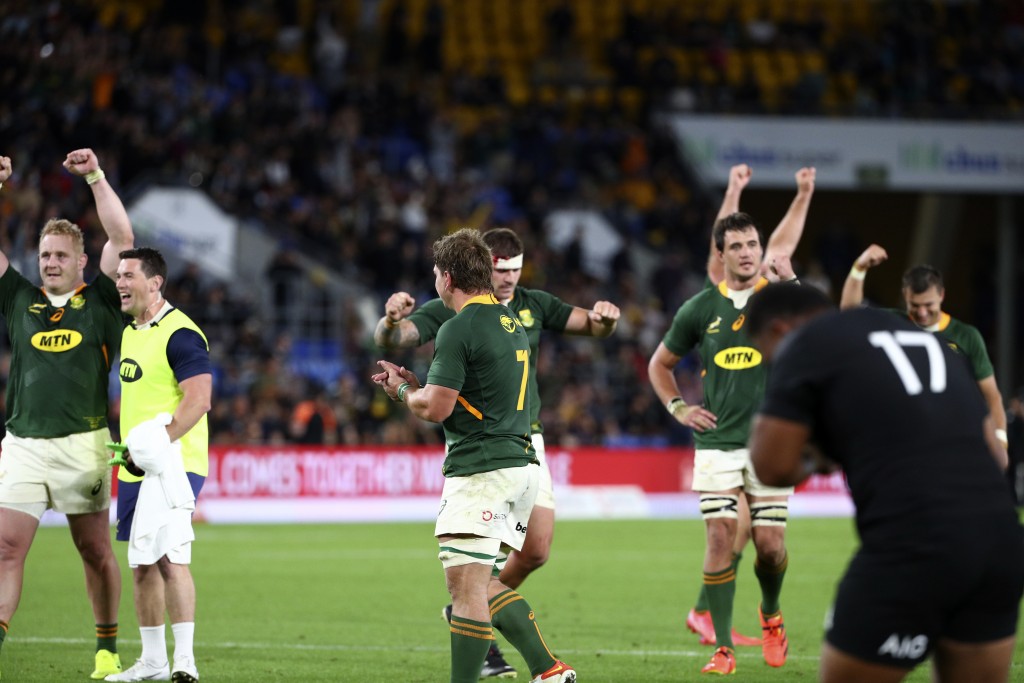 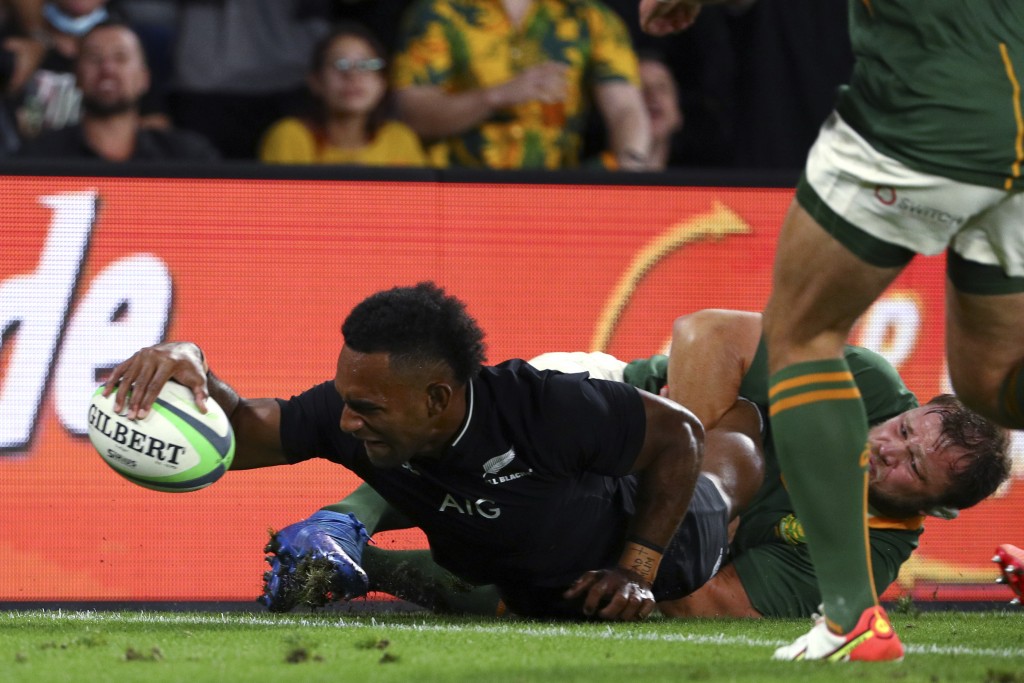 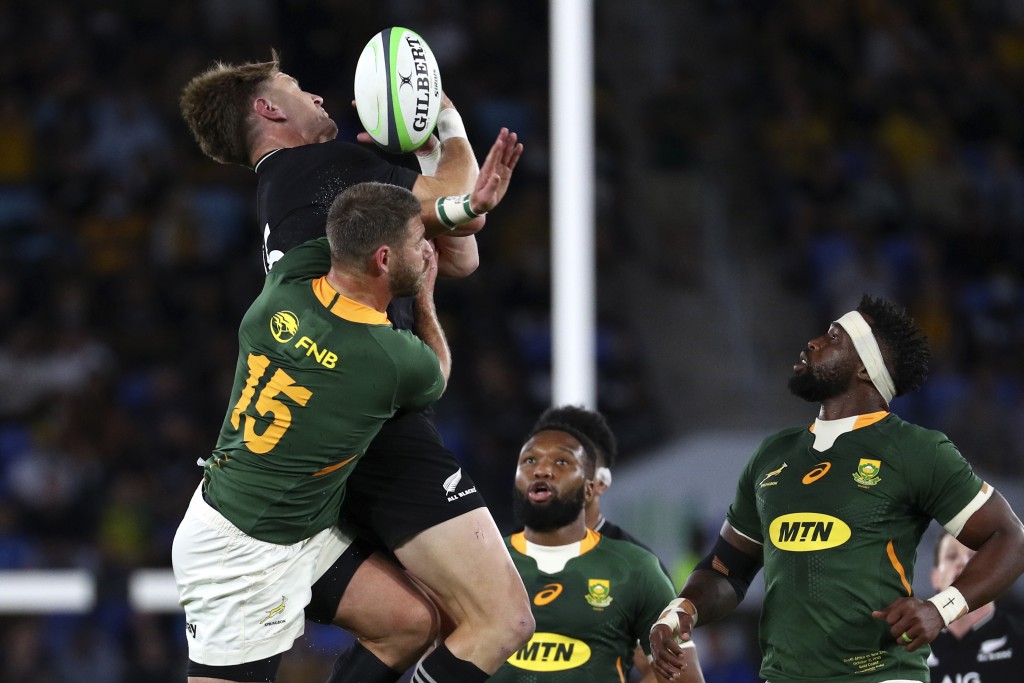 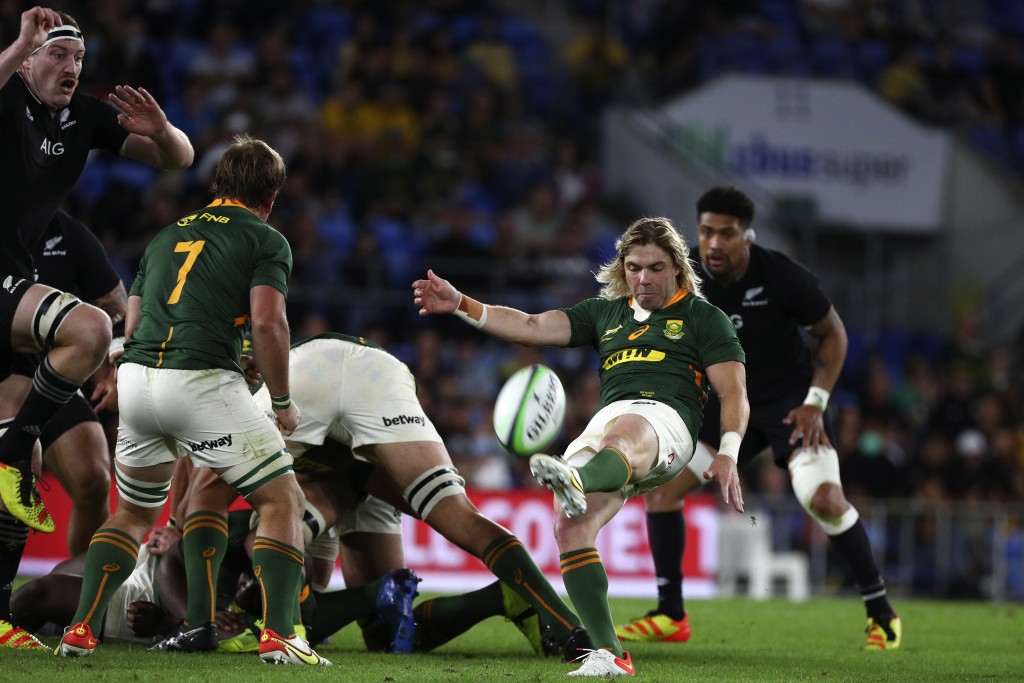 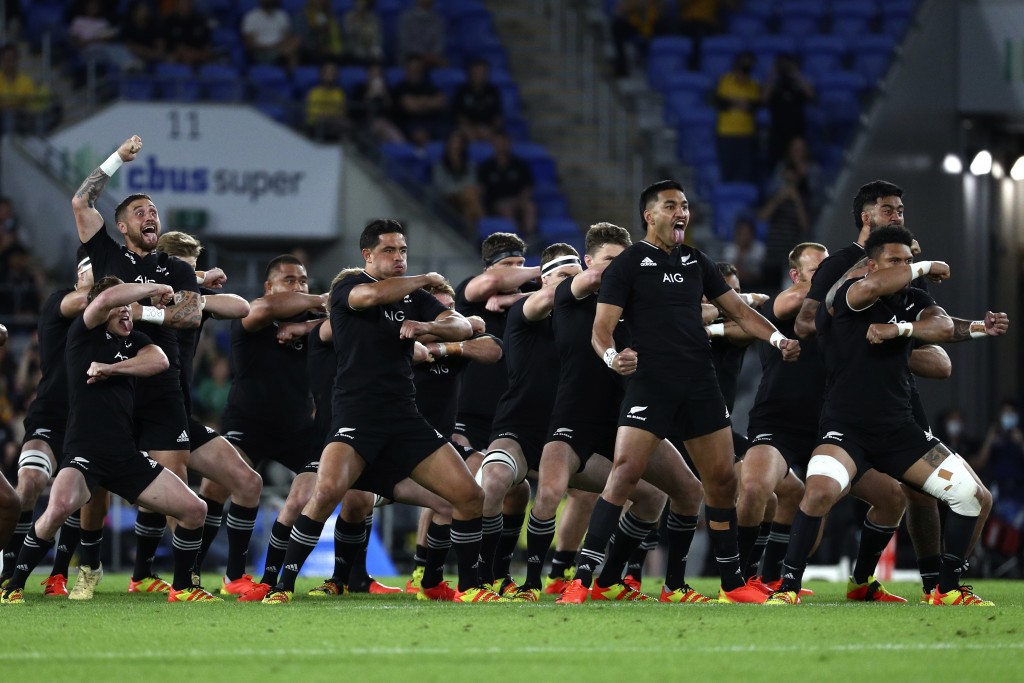 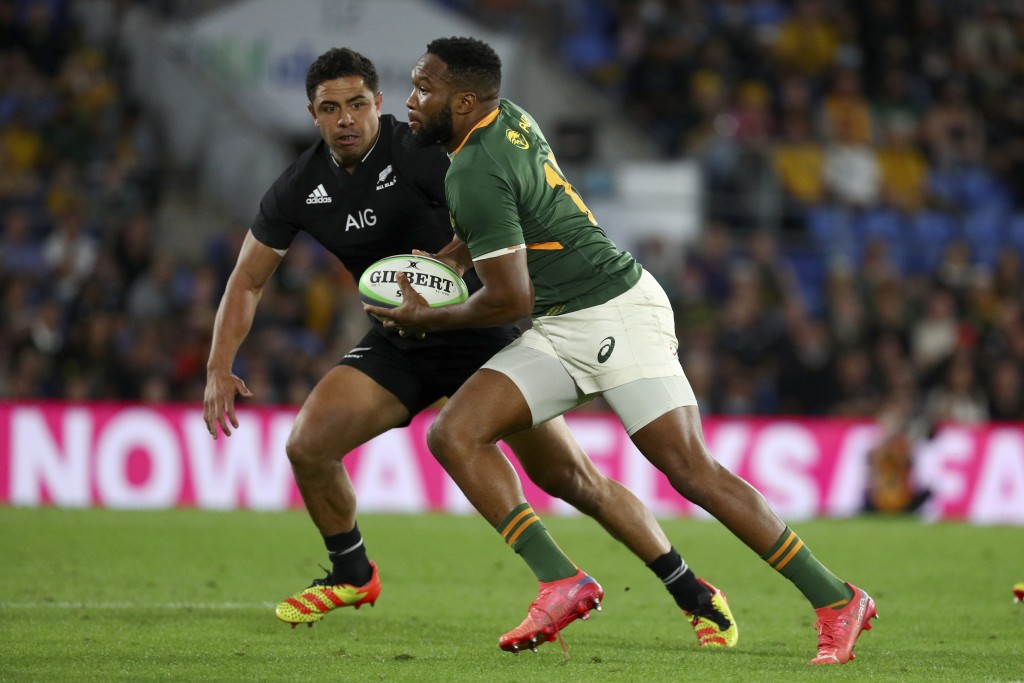 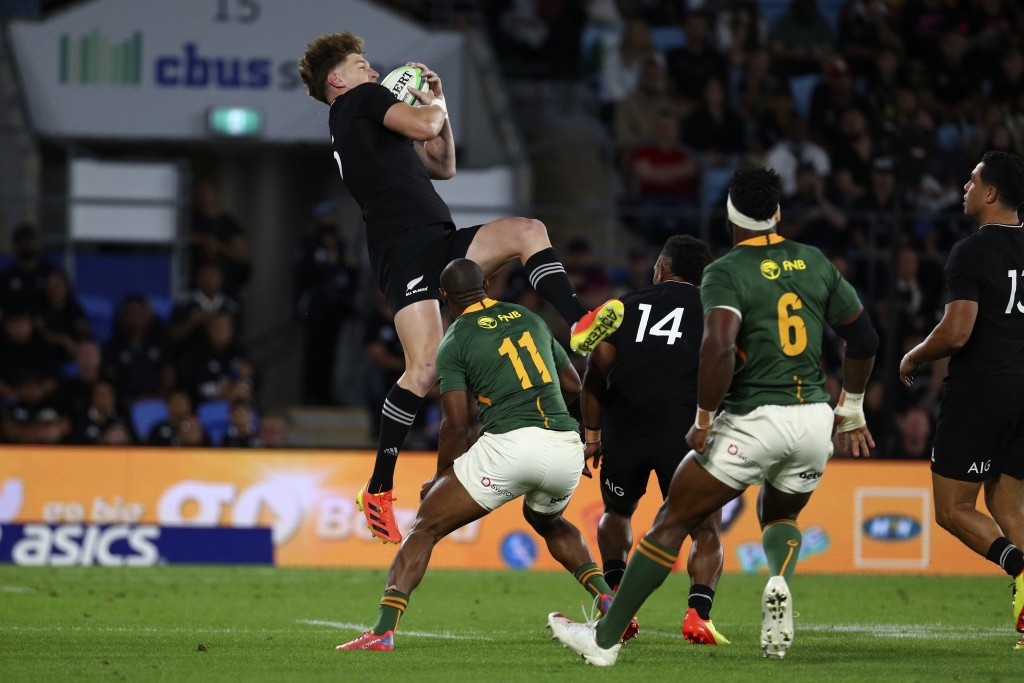 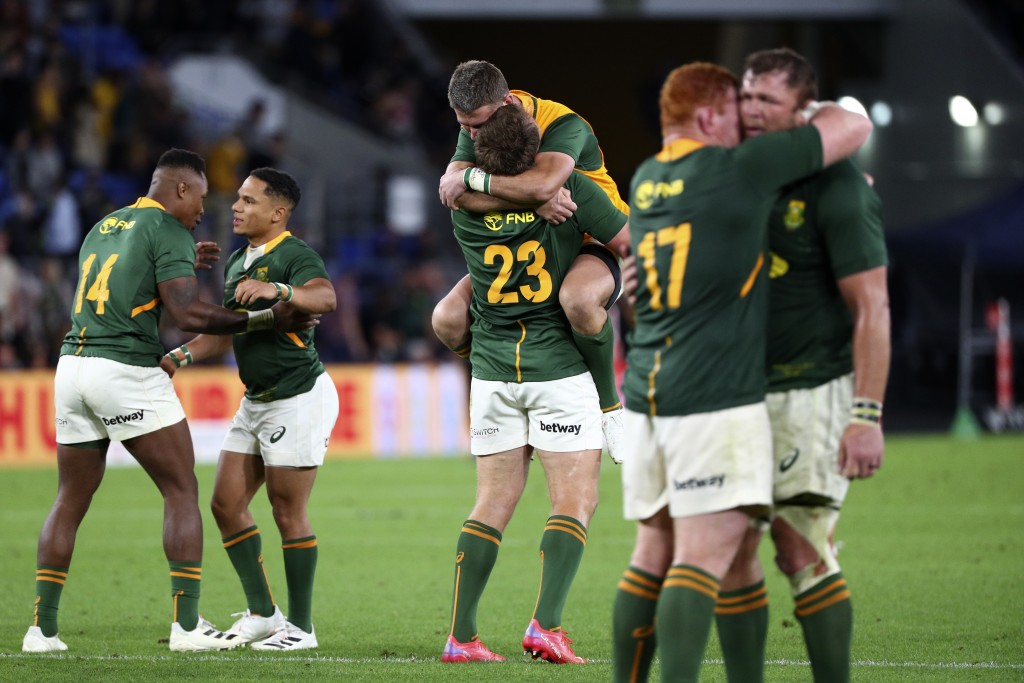 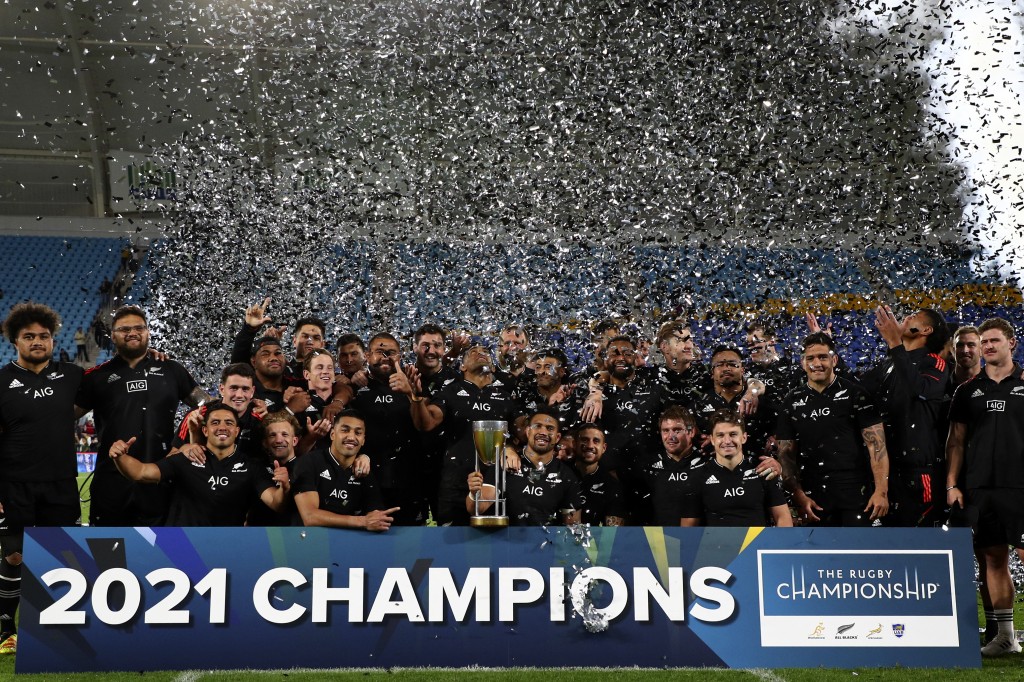 GOLD COAST, Australia (AP) — This week it was the Springboks who won with a last-minute penalty goal in a Rugby Championship test against the All Blacks.

Last weekend Jordie Barrett landed a late penalty and the New Zealanders won by two points to clinch the title, with a game to spare, in the 100th test between the two nations.

Barrett again put the All Blacks ahead with a minute to go but this time the World Cup champion South Africans had time to respond before a mostly New Zealand crowd of just over 20,000, a capacity under COVID-19 restrictions for Robina Stadium on Australia's Gold Coast.

Springboks coach Jacques Nienaber said the last-minute victory was a confidence boost for his squad after a tough month on the road and narrow defeats to Australia and New Zealand.

“Obviously we lost momentum in not securing victories in the first three games,” he said, but "if you look at it, that’s the margins when Nos. 1, 2 and 3 in the world play against each other.

“This weekend, we were fortunate we got an opportunity in the end of the game to win it. Last week, it was New Zealand."

The All Blacks led 20-14 at the break after a half of expansive rugby that contrasted starkly with last weekend's tactical, kicking contest that the New Zealanders won 19-17.

The Springboks opened the scoring in the sixth minute, swooping when the All Blacks lost possession while trying to counter from deep.

Lukhanyo Am threw a behind-the-back flick pass to find support before his midfield partner Damian de Allende crossed in the right corner.

After an exchange of penalties, the All Blacks made it 8-8 when Reece Sevu scored the first of New Zealand's three first-half tries.

Flyhalf Beauden Barrett kicked deep right for a flying Reece, who reached over to score as he was being tackled into the corner.

The Springboks narrowly missed in the 19th when hooker Bongi Mbonambi lost control of the ball as he tried to reach over the tryline after a burrowing run but eventually went ahead with a penalty goal in the 24th.

The All Blacks responded quickly, with flanker Ardie Savea finishing off after Beauden Barrett stepped into a gap in the midfield before unloading to Rieko Ioane, who broke tackles before unloading the the final pass.

Another try went astray for the All Blacks when center Anton Lienert-Brown was tackled into touch two meters out but they made up for it a minute later, making the score 20-11 when scrumhalf Brad Weber scored after Scott Barrett's lineout steal.

The Springboks scored the next 14 points, with three penalties from Handre Pollard and winger Makazole Mapimpi beating the cover defense to score in the left corner in the 52nd and capitalize on some sustained attacking pressure.

Jantjies slotted a dropped goal to give the Springboks a 28-26 lead in the 77th and Barrett put the New Zealanders ahead 29-28 with another penalty and just over a minute to go in regulation.

It wasn't over, yet.

The siren sounded just after South Africa was awarded a penalty 60 meters out and the Springboks took the option of kicking for touch to get a lineout on New Zealand's 22-meter line.

Pressure paid, with the New Zealanders penalized for an off-side infringement and Jantjies calmly taking the points.

“We're obviously bitterly disappointed, lacked a little bit of discipline in the last two minutes,” All Blacks head coach Ian Foster said. “To lose any game at the end when you’ve got control of it, it's frustrating.

“I thought the South Africans played superb — they came with a lot of attitude, they carried hard, they moved us around and really challenged us.”

All four teams will have a short break before their northern hemisphere tours to continue their preparations for the 2023 Rugby World Cup in France.

The All Blacks had targeted a “Grand Slam” of six wins from six against their southern hemisphere rivals, Foster said, and clinching the Rugby Championship last weekend was no excuse for not completing the mission. He did say the lessons learned would benefit his team in the longer term.

“One way to get ready for a World Cup is to build confidence through building your game and winning big games," he said. "So that's where tonight will be gold for us."