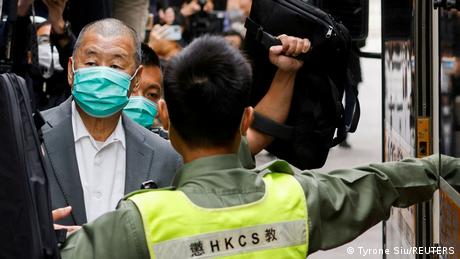 Prominent Hong Kong pro-democracy activist and media tycoon Jimmy Lai was sentenced to 14 additional months in prison Friday for his role in organizing anti-government protests in 2019.

Why were they sentenced again?

Lai and several other activists were charged with "incitement to take part in an unauthorized assembly."

The new sentencing involves a pro-democracy protest in October 2019 on China's "National Day" marking the anniversary of the founding of communist China.

Widespread clashes between protesters and police broke out during National Day protests that year.

Although the 2019 march attended by the activists who were sentenced on Friday was mostly peaceful, the activists had assembled without the required official police permission.

Lai is already serving sentences adding up to 14 months after pleading guilty to charges involving two other protests in 2019.

Why are Hong Kong protesters being arrested?

Authorities in Beijing responded by targeting the movement's leaders and issuing a strict new national security law for Hong Kong that criminalizes secession, subversion and collusion with foreign forces to interfere with local affairs.

Dozens of pro-democracy figures have since been arrested under the law. Most of Hong Kong's prominent democracy leaders are either under arrest, in jail or have fled overseas.

Lai, the founder of pro-democracy newspaper Apple Daily, also faces separate charges under the security law, including including collusion with a foreign country. He has been sitting in jail since December 2020 after being denied bail on those charges.

Friday's ruling comes on the heels of Hong Kong lawmakers passing a new electoral law that reduces voting rights in the financial hub.

The law grants Beijing more power to appoint and remove lawmakers on Hong Kong's legislative council, while ralso educing the number of seats elected by the public.