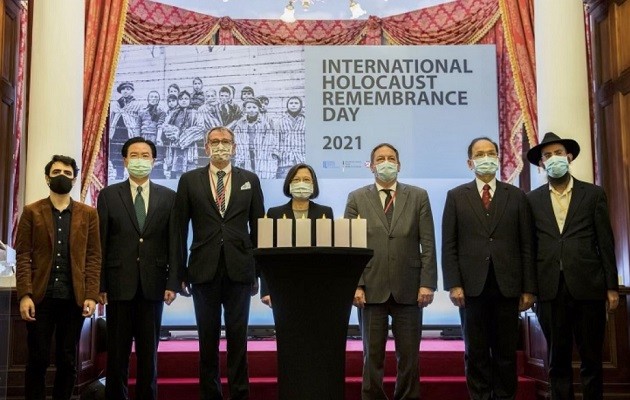 TAIPEI (Taiwan News) — Taiwan's leaders came together Thursday (March 25) with Israeli and German representatives, and members of the local Jewish community, to mark International Holocaust Remembrance Day at a ceremony that was postponed for two months due to the pandemic.

The commemoration is organized each year by the German Institute Taipei and the Israeli Economic and Cultural Office in Taipei. The Taiwan Foundation for Democracy joined the de facto embassies for the first time this year as a co-host.

In attendance on Thursday were President Tsai Ing-wen (蔡英文), Foreign Minister Joseph Wu (吳釗燮), German Institute Taipei Director Thomas Prinz, Israeli Representative Omer Caspi, and Legislative Speaker and Taiwan Foundation for Democracy head Yu Shyi-kun (游錫堃). Each of them was invited to light a candle in honor of the Holocaust's millions of dead.

"It is only by sharing the memories of these individuals that we can reflect on this dark moment of history," said Tsai. "The scars of the Holocaust continue to remind us of our responsibility to ensure such a tragedy never happens again."

She said that for Taiwan, this responsibility entails facing its own authoritarian history, safeguarding human rights, and standing firm on the country's commitment to democracy. "Learn from the past, protect the future," said Thomas Prinz, adding that remembering this tragic episode in history is the responsibility of the modern German nation.

The envoy said he is sometimes asked why the German Office Taiwan holds the annual memorial in Taiwan, "a country far away from the atrocities committed by the Nazi regime." The reason, he stated, is that it provides a chance to reflect on the values of peace, human rights, democracy, press freedom, judicial independence, and the protection of minorities.

This is why Taiwan, a "democracy in this very specific international environment," is a fitting place to hold such an event. Caspi, whose grandparents on his father's side, and brothers were killed in the Holocaust, said, "It is hard to imagine that only 80 years ago, my people, my family members were helplessly slaughtered."

"One of the key factors which enabled the Nazis to perpetrate the vicious act of terror against the Jews was indifference," he remarked. He went on to say that this indifference still exists in the form of rising antisemitism around the world and that many of its less dramatic manifestations are being ignored.

The speakers' remarks were prefaced by singer and actress NaTang's (堂娜) performance of "Avinu Malkeinu" (Our Father, Our King), a Jewish prayer typically cited during the 10 Days of Repentance, accompanied by Juilliard graduate Wang Pei-Wen (王貝文) on cello. Rabbi Leon Fenster of the Taiwan Jewish Community was invited to sing Psalm 121, while Rabbi Shlomi Tabi recited the El Malei Rachamim prayer in memory of the departed.

The U.N. in 2005 declared Jan. 27, the day the notorious Auschwitz concentration camp was liberated, to be International Holocaust Remembrance Day. The day honors the millions murdered by the Nazis, including some 6 million Jews.