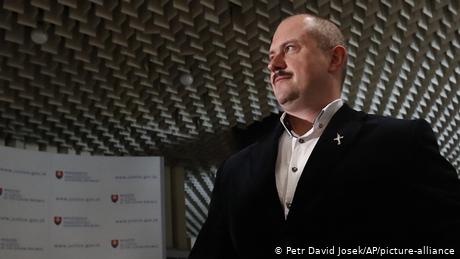 A Slovakian court on Monday sentenced the head of the right-wing extremist People's Party — Our Slovakia (LSNS), Marian Kotleba, to four years and four months in prison.

The special court for organized crime found Kotleba guilty of promoting a movement and ideology that aims to suppress civil rights and democracy, after using a well-known neo-Nazi symbol.

The verdict, which is not yet final following an appeal made by Kotleba, came despite a closing plea that lasted nearly eight hours.

It marks the first time a court in Slovakia has sentenced a member of parliament to prison.

Kotleba stood trial after he presented three poor families with checks for €1,488 ($1,756) in 2017. The number 1488 has a symbolic meaning for neo-Nazis and white supremacists, referring to a 14-word racist slogan and the Nazi salute "Heil Hitler," which begins with the eighth letter of the alphabet.

The court accepted the prosecutors' argument that the racist references were intentional. Kotleba, 43, denied the charges.

"I'm not aware of having committed any crime," he told the court. If the ruling is confirmed by the Supreme Court, Kotleba will lose his parliamentary seat, as set out in the Slovakian constitution.

A history of charges

Kotleba, a former governor of the Banaska Bystrica region, is known for hosting organized marches in which his party's members wore neo-Nazi uniforms. He has in the past been accused of using hate speech, but has never been convicted.

His party wants to take Slovakia out of the US-led NATO alliance and is deeply critical of the EU. The LSNS has publicly voiced support in the past for Slovakia's World War II Nazi puppet regime, whose leader, Jozef Tiso, helped deport tens of thousands of Slovak Jews to concentration camps.

Tiso was later convicted of treason and crimes against humanity and executed.

In 2018, at the request of the prosecution service, the country's top court decided not to ban the LSNS. In the past, the Slovakian judiciary has repeatedly been criticized for not being forceful enough against right-wing extremism.

The LSNS, which first entered parliament in 2016, placed fourth in Slovakia's February 2020 election with 8% of the vote, winning 14 out of 150 seats in parliament.