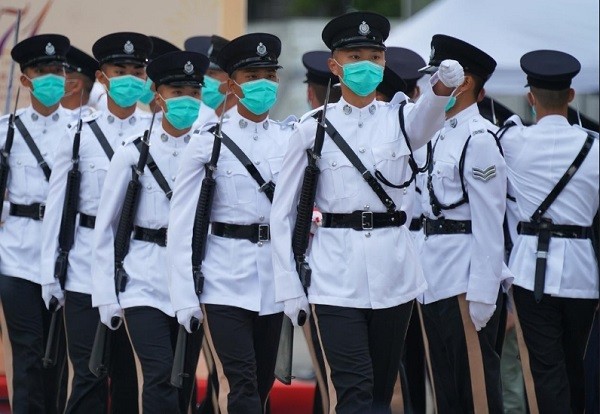 Security was tight in Hong Kong early on Thursday with police vans dotting the streets ahead of an expected China national day march by pro-democracy protesters, despite authorities banning the demonstration.

Anti-government protests, which often turned violent in 2019, have been smaller and fewer this year due to coronavirus restrictions on group gatherings and fears over a sweeping national security law imposed by Beijing on June 30.

But there have been calls online for protests in several districts after a march application by Civil Human Rights Front, which organised million-people marches last year, was dismissed by police citing COVID-19 and violence at previous marches.

It was unclear how many people would join any demonstrations.

“I don’t think protesting is an effective way to express my opinion, because the government tries every method to suppress protests,” said 22-year-old Lee as she looked at a group of police officers across the street.

Four members of the League of Social Democrats, led by veteran activist Leung Kwok-hung, known as Long Hair, marched holding a banner reading “There is no national day celebration, only national mourning.” Four is the maximum number of people allowed to gather under coronavirus restrictions.

The Oct. 1 China national day is resented by many democracy supporters in Hong Kong who say Beijing is eroding the wide-ranging liberties the former British colony was promised when it returned to Chinese rule in 1997.

For pro-Beijing supporters, it is an opportunity to drum up patriotism in China’s most restive city.

Chief Executive Carrie Lam attended a low-key flag raising ceremony along with other officials on Thursday. The government did not open up the ceremony to the public, citing health risks.

“Myself and my colleagues will fearlessly continue to fulfil our responsibility to uphold and protect national security with determination,” she said.