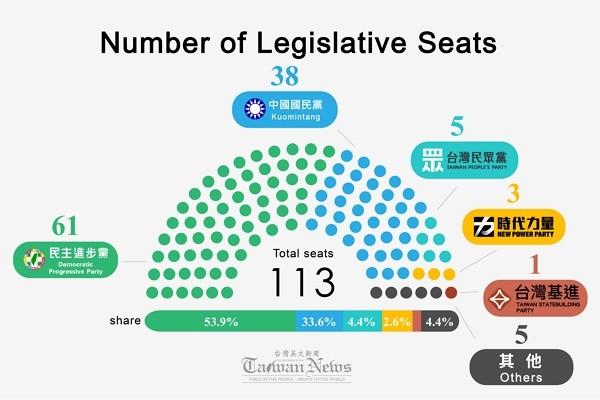 TAIPEI (Taiwan News) — The ruling Democratic Progressive Party (DPP) has secured 48 of the 73 legislative seats that are directly elected through local districts, with five constituencies yet to announce their winning candidates.

Concurrently held with the presidential election, the legislative elections determine the 113 seats in the Legislative Yuan. These include 73 directly elected in local single-member districts, six elected by indigenous Taiwanese, and 34 elected by party-list proportional representation.

As of 8:51 p.m. Saturday (Jan. 11), the pan-green camp had more winning candidates in all six of the country's special municipalities, including Taipei, New Taipei, Taoyuan, Taichung, Kaohsiung, and Tainan, than its main rival Kuomintang (KMT). The DPP candidates had sweeping victories in all of Kaohsiung's constituencies, where KMT's presidential candidate Han Kuo-yu (韓國瑜) serves as the city's mayor.

While election results so far guarantee at least 46 legislative seats in local districts for the DPP, the KMT has also won 25 seats across Taiwan. Taiwan Statebuilding Party (TSP) obtained one legislative ticket, while independents have secured three.

Despite losing to KMT candidates in both of Taiwan's offshore counties, the DPP continues to lead in the counting of the legislative-at-large election ballots. The party is expected to retain its majority in the Legislative Yuan with 60 seats or more, clearly surpassing half of the available slots, reported Liberty Times.