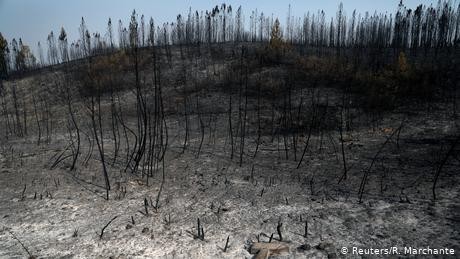 Thirty-three people were reported injured as wildfires continued to rage across central Portugal on Monday.

Despite reports of progress being made, authorities requested two water-bombing planes as winds revived the fires.

"During the morning it was practically controlled but weather conditions did not allow a consolidation of the situation," Portuguese Prime Minister Antonio Costa said.

Several villages were evacuated to limit the casualties in a mountainous area of the country about 200 kilometers (124 miles) north of Lisbon.

Civil Protection said earlier on Monday that the fire, which broke out on Saturday afternoon, was 90% under control but warned that the remaining infernos needed "a lot of attention" as winds could easily fan the flames in exceptionally dry conditions.

From bad to worse

More than 1,000 firefighters have been deployed since the blazes began over the weekend.

Fernando Almeida told the news agency AFP in the village of Casais de Sao Bento: "Yesterday we thought we were done, it was completely extinguished, then suddenly the fire resumes with this wind, we can't believe it."

Authorities tried to maintain calm. Civil Protection commander Pedro Nunes told reporters: "We have the capacity to respond (to the wildfire), both terrestrial and aerial, because the whole focus is on this operation."