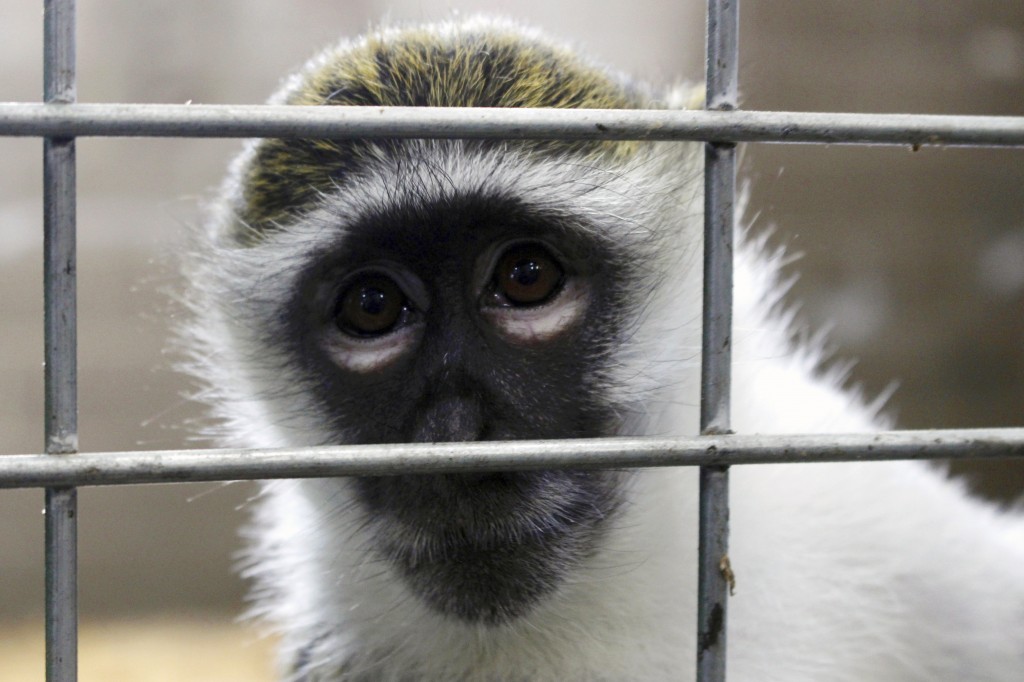 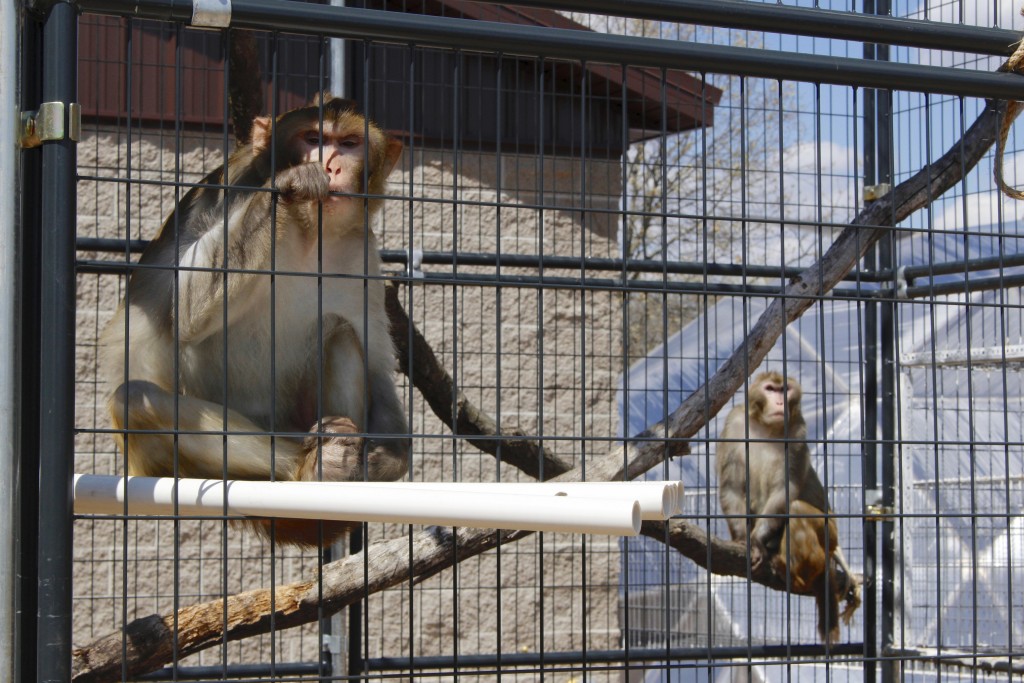 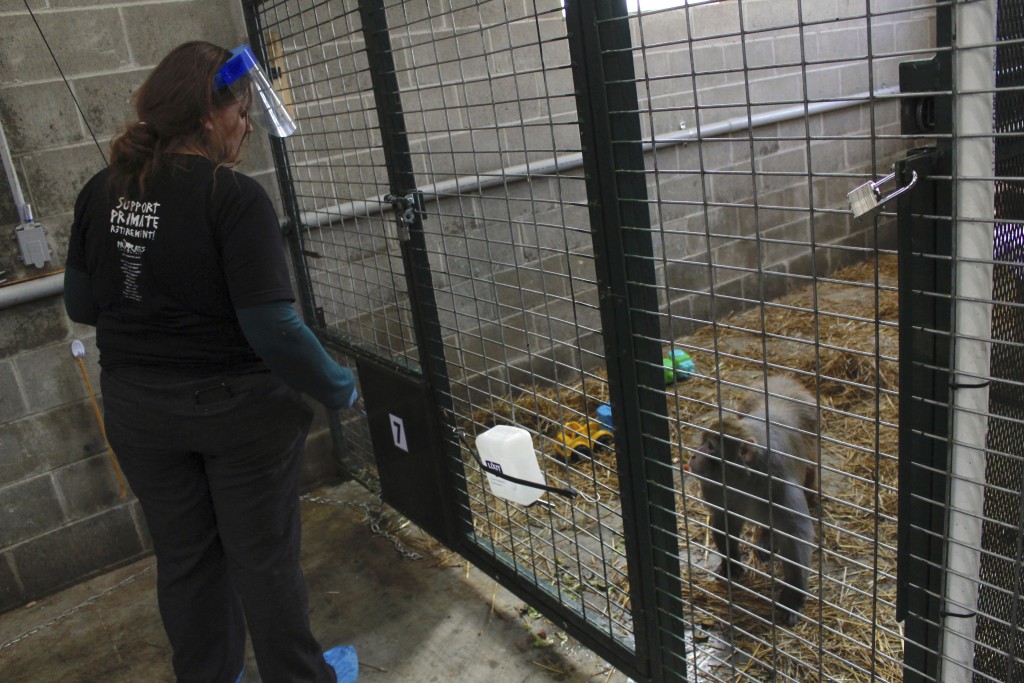 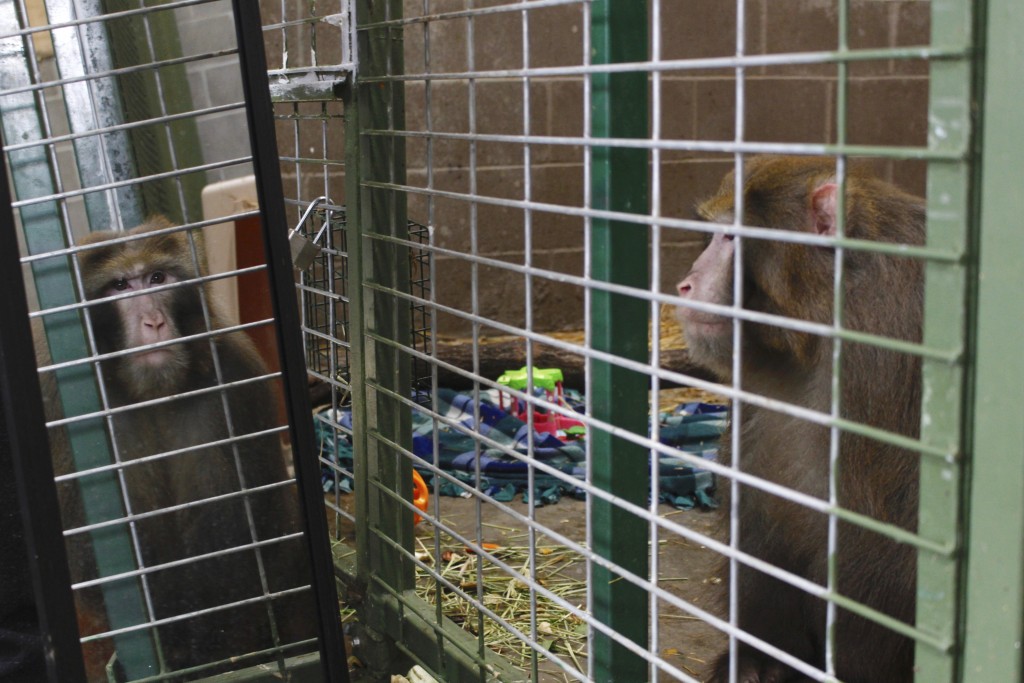 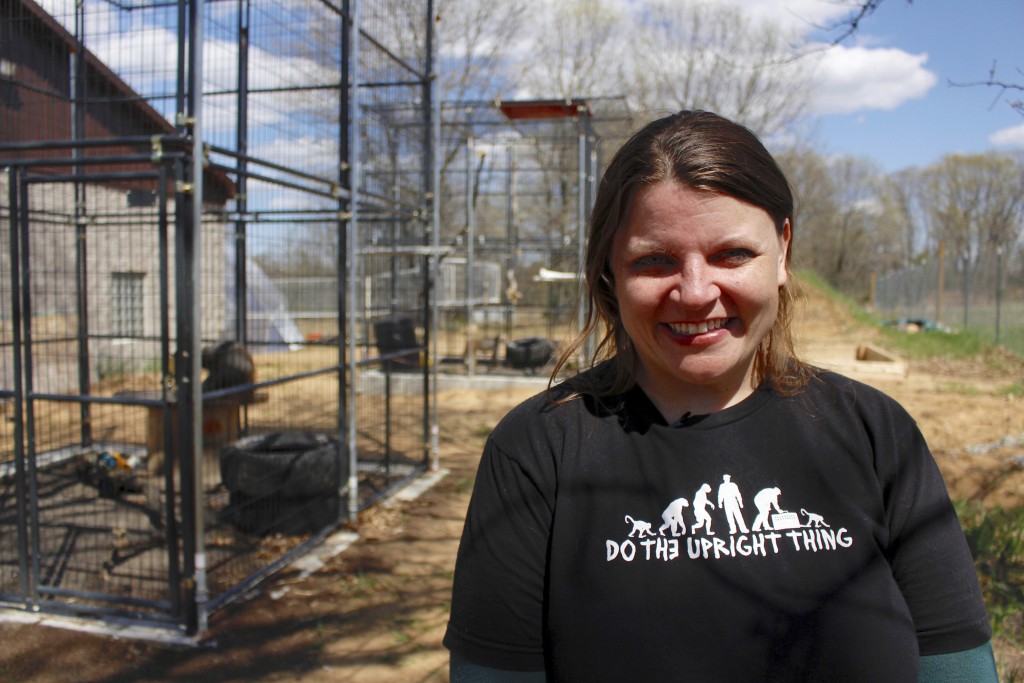 WESTFIELD, Wis. (AP) — Izzle, Timon, Batman, River and Mars spent years confined inside a lab, their lives devoted to being tested for the benefit of human health.

But these rhesus macaques have paid their dues and are now living in retirement — in larger enclosures that let them venture outside, eat lettuce and carrots, dip their fingers in colorful plastic pools, paint, and hang from pipes and tires — in relative quiet.

More research labs are retiring primates to sanctuaries like Primates Inc., a 17-acre (7-hectare) rural compound in central Wisconsin, where they can live their remaining years, according to the sanctuaries and researchers. For some monkeys, it's their first time hanging out in the fresh air.

"Just to see them look around in amazement. You know it was all very calm and peaceful," said Amy Kerwin, who worked for 15 years to get the Westfield, Wisconsin, sanctuary off the ground after being employed in a University of Wisconsin research lab.

There were approximately 110,000 primates in research facilities in 2017, according to the most recent data available from the U.S. Department of Agriculture.

While most research facilities need primates to be euthanized to examine their tissues, technological advances, such as brain scans, mean fewer monkeys need to be put down. Plus, researchers who become close with the animals are making more efforts to give the ones who can survive a retirement, rather than euthanization.

In 2015, a group of researchers, graduate students and an ethicist created the Research Animal Retirement Foundation. It raises funds for labs to pay the sanctuaries to retire them. So far they have given $33,000 in funding for three monkeys who went to the Wisconsin sanctuary.

A visit to the Peaceable Primate Sanctuary in Indiana helped convince Rep. Jackie Walorski, R-Ind., to author a bill introduced last month, along with Rep. Brendan Boyle, D-Penn., that requires federal agencies to develop a policy allowing animals no longer needed for research to be adopted out or put in sanctuaries. Currently, no federal regulations dictate what happens to them. Some are sold to other studies when one study is done.

The bill doesn't address funding, one of the main hurdles to get primates into retirement sanctuaries.

Currently, grants through the National Institutes of Health, which is the largest public funder of biomedical research in the world, don't include money for retirement. That leaves the labs and sanctuaries to find the tens of thousands of dollars per monkey, per year needed to care for them.

Monkeys are finished with studies at different ages and some can live for decades. Some can also leave with lingering issues, like compulsive behaviors caused by boredom.

That's why many sanctuaries require the labs to send some funding, often between $10,000 and $20,000, to help care and create space for monkeys. Since many of the primates have only lived in labs, they don't have the skills needed to live in the wild.

Most primates in accredited sanctuaries are chimpanzees, capuchins, and squirrel monkeys, according to Erika Fleury, program director for the North American Primate Sanctuary Alliance, or NAPSA, an advocacy group for captive primates. They come from research, the entertainment industry or private homes.

Chimpanzees are no longer used in most research. The NIH announced in 2013 it would stop supporting them in research and that they should be moved to sanctuaries, with funding. It pointed to a report from the Institute of Medicine in 2011 that concluded the use of chimpanzees in biomedical research was unnecessary.

Cindy Buckmaster, chair of the Americans for Medical Progress, which represents research universities and medical research companies, said that besides funding, researchers are concerned about sanctuaries standards, their financial viability and whether some sanctuaries' ties to animal rights groups will cause them to badmouth the institution.

"We really feel very grateful to them and we want them to have wonderful lives after," Buckmaster said. "They certainly deserve it. But it has to be done well and it has to be done properly because we're not going to put our animals in harm's way."

Some animal rights groups, including People for the Ethical Treatment of Animals, don't support research but do agree with retiring monkeys to sanctuaries rather than having them euthanized.

Sanctuaries have been around for decades but, in 2010, more than a half-dozen came together to create NAPSA.

Currently, there are eight member sanctuaries, with about 775 primates. Membership requires the sanctuaries be USDA licensed, accredited by the Global Federation of Animal Sanctuaries or certified by the Association of Zoos & Aquariums, among many guidelines. There are 31 other, nonmember sanctuaries in the U.S. and Canada that have primates but have a variety of standards, according to NAPSA.

Besides requiring high standards for sanctuaries, NAPSA is also upping efforts with researchers to encourage them to ask for retirement funding upfront.

An NIH spokeswoman wouldn't respond to whether the agency would consider adding money to grants for monkey retirement care, only saying in a statement that the animals' owners are responsible for ongoing care.

Kerwin, who started the Wisconsin sanctuary, said she's seen monkeys become calmer in retirement. Her goal is to have 100 monkeys over the next 20 years.

"Just knowing that these little individual personalities are in the thousands and largely no one knows about them and even the need to help them. That's why I feel it's important," she said.